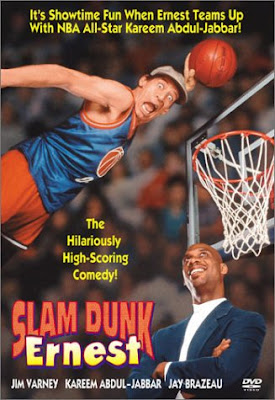 As the 6th of 8 full-blown Ernest movies, and the only one to officially suffer a straight-to-tape release, Slam Dunk Ernest doesn’t have a lot going on for it, lacking either the absurd high-concept premises featured in earlier films or the chirpy idiocy that made Ernest a house hold name. At the outset of this story Ernest, perennial under achiever, has taken up a night shift as a cleaner of corporate buildings. He’s part of a small crew of African Americans working for the Clean Sweep company, a small business dependent apparently on one contract. As the film makes no effort to develop any of these characters, they basically function as a unit “black person” to contrast against Ernest’s mild redneckiness. I say mild because in the age of Larry the Cable Guy caricature, Ernest is basically just a man of below average intellect who has traces of regional dialect.

Anyway, Ernest’s highest ambition is to be allowed by his coworkers to join their recreational league basketball team. And that’s it. Ernest does not fight a troll, replace Santa Claus, battle an evil doppelganger while locked in prison, or even do anything as interesting as go to Africa, as he does in a later film. Slam Dunk runs on empty. The chief novelty in the film comes in the form of a pair of magic kicks, awkwardly delivered in a shamelessly unsupported intervention by the angel Kareem Abdul-Jabbar, who hands over the shoes reluctantly, openly questioning the will of God. If a basketball angel questions the Almighty’s judgment about giving magic shoes to Ernest, I think there might be an inherent problem with the movie’s set-up.

Soon after acquiring these magic shoes, Ernest begins tearing up the court, impressing the “black person” and garnering attention from a school-marmy love interest Erma Terradiddle. Soon the Clean Sweep team earns the chance to go head to head with real NBA team the Charlotte Hornets. That’s the big exciting goal of the movie. To do well against the Charlotte Hornets in a novelty exhibition game. With the help of magic shoes. Things go as you would expect, with Ernest racking up hundreds of points single-handedly, getting cocky, and eventually earning the ire of his teammates. Also, some evil corporate guy with a villain mustache tries to tempt him or something, and uses the secretly evil Erma to corrupt him with tangible sexuality. The basketball scenes are unfocused, and mostly in place to show Ernest making incredibly fake looking jumps and then cartoonishly prance in the air before making slam dunks, which, admittedly, is almost funny on occasion, and shows the only spark of the old spastic Ernest we used to love.

That’s the disheartening thing about Slam Dunk Ernest, beyond the limp premise, lack of character differentiation, absence of exciting goals, poor script, and direct-to-video production values, it feels like Jim Varney isn’t all that into being Ernest any more. His undulations are more practiced, his mugging perfunctory, and his freewheeling clumsy positivism dampened. His face is old and tired, his body wiry and thin underneath the denim vest. Sure, he occasionally talks to himself, and we do spend a few minutes in his wacky bachelor pad, but even all of that is toned down, more committed single man’s residence than Peewee’s Playhouse. And there’s no Rimshot in sight. Perhaps the dog quietly died before the movie takes place, taking Ernest’s spark to the Earth in a shallow grave in the back yard.

NOTE: The cover art of the movie claims that “It’s Showtime when Ernest teams up with NBA All-Star Kareem Abdul-Jabbar.” This is patently false. Abdul-Jabbar literally appears out of nowhere, gives Ernest a pair of annoying chipmunky shoes, somewhat against Ernest’s will, and then disappears. I think he shows up again near the end in the bleachers for a shot or two. He’s onscreen for maybe two or three minutes. If that constitutes “teaming up” then I’ve been on a lot of teams. Some of them with women!
Posted by Cody Peace Adams at 11:48 AM

Looking for the Best Dating Site? Join and find your perfect match.