At Center Court with Phoenix Stan 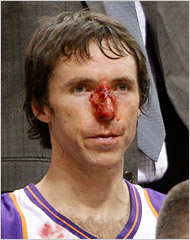 Peace on earth. Good will toward men.

Earlier this week, Phoenix Stan of Bright Side of the Sun interviewed Graydon and myself for a podcast that was surprisingly cordial. We even--gasp--enjoyed ourselves. Strange, that. Phoenix fans and Spurs fans playing nicely. The Christmas spirit has imposed its glad tidings and good cheer all over our rightly thorny dispositions. It'll pass. But for now Stan joins us for a a little yuletide tit for tat at Center Court.

TV: How does it feel to lose to the same team time and time again? Why do you hate us so much?

PS: Wow. Do you guys have some kind of insecurity issues that you need to be loved? What's up with that?


To answer you questions. a) It blows. b) See answer a.

TV: Last summer, I went through a blasphemous stretch wherein I wondered if the time had come for the Spurs to move Manu Ginobili. At the time, he was the second best shooting guard on the planet, but hobbled by injury and likely to decline in value from that point forward. It made me sick to even think about a Manu-less existence, but sometimes the hard thing is the right thing. For a week or two, it made sense but then it passed. Have you had one of those moment's regarding Steve Nash? What will be the tell-tale sign that Kerr ought to pull the plug? Missing the playoffs? Locker room disintegrates? Mired in the middle?


Ok, now back to reality. I have thought about trading Nash and there's been some mild discussion about it. You can't help but wonder if his value in a trade will decline rapidly after this year. If, come trade deadline time, the Suns were clearly out of it, you would hear more of that talk. But I don't see it happening. The Suns are right there in the mix and the locker room appears to be in perfect harmony now that Bell and Diaw are gone. This new version of the Suns is the best so far this year and rapidly improving. Watch out!

One does hear a lot more talk about moving Amare. There's a lot of people that think he's never going to be a guy you can build a franchise around despite all his talent and desire. So do you consider moving him? What do you get back? Al Jefferson? Kevin Durant? That's really the problem when you get past the frustration of "will he ever reach potential?" There's really no player that makes sense coming back. You aren't going to get Wade or LeBron for him. Or Kobe. Or KG. Or Timmy for that matter (not that we would want him!).

But the fear in Phoenix is that after Nash and Shaq are gone then no matter what you do to build around Amare you will never have a championship team unless you get lucky in the draft and find a guard like Roy or Paul that can be the leader.

TV: What do you make of Shaq's resurgence and his demands for more touches? Shaq being Shaq or justified?

PS: Well, O'Neal is playing at an All-Star level and deserves more touches. I am NOT a Shaq fan and HATED the trade but there is no denying that Shaq is playing great this year. He should be getting touches but like everything its a balance. I choose not to interpret his most recent comments as a complaint but more of a statement of fact. He should get touches, especially early when he's freshest. Shaq can get opposing bigs into foul trouble and "soften" up the lane for J-Rich and Hill. Going to him early will keep Nash and Amare fresh and ready to close the game out.

When you think about it, the Suns offense is very deadly because we have the ability to score in any number of ways. I think the team chemistry issues and demanding the ball stuff will fade away as the group is successful together.

TV: The Suns are a better ball club with Jason Richardson. Shaq is playing his best basketball in years. In my estimation, Steve Kerr has done a good job in Phoenix from a trade value, cap-management standpoint. But it also seems like the players see him as Judas for attempting to turn the Suns into Spurs-lite. Is he destined to play the role of the hated "will never do right by us" executive for killing the glorious 7 Seconds or Less Suns?

PS: D'Antoni killed 7SOL last season even before the Shaq trade. He recognized that in order to win in the playoffs (beat the Spurs) the team needed to be able to score in the half court, get to the line, and keep Nash fresh. Then when he (Mikestache) pushed for the trade that sealed it.


As for Kerr, whether he's a Moron or Genius changes on a daily basis. That's why we created the Steve Kerr Moron Meter to track his accumulation of Genius and Moron Points.

The balance between when to run and when to slow it down has been a struggle and up until the J-Rich trade there was a schism in the locker room. Now--at least in the last 4 games--we are seeing the team come together. Against the Blazers, the Suns ran and shot in a throwback style but Shaq also pounded the ball on the low block, scoring 19. Same story in the Nuggets game: controlled chaos on the break, Shaq bullied to another 19.

If you look ahead at what this team can be when the defensive rotations improve (we did hold Denver scoreless for 3 minutes to close out the game) and the offense has more time together then there is every reason to think we can be good enough to get beat by the Lakers. It's been a rough road to this point, but standings-wise we are right there with everyone else.

So watch out Spurs fans. We are coming for you! Again! This time we mean it! Really!

Well, okay, so we won't be meeting under the mistletoe anytime soon. But it was still fun.

Hey, Steve Nash, did you hear what Santa gift wrapped for Tony Parker this Christmas? That's right, your defense.
Posted by Timothy Varner at 3:00 AM

Labels: At Center Court with...