Match-Up of the Night: Joe Johnson vs. Manu Ginobili 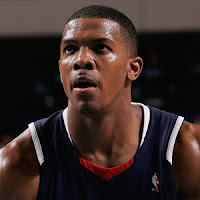 You may not know this but Joe Johnson is quietly having a terrific year. In fact, Joe Johnson has been quietly having terrific years for years. He is a work horse, having averaged around 40 minutes a game since the 03-04 season. And oh boy, can the man score. If you happen to have missed his 20-point 4th quarter performance in the opening round of the playoffs last year against the Celtics, you need to go watch the highlights. I'll briefly hand it over to Matt Moore, who described Johnson's performance in his own inimitable style:

Scoring 20 points in the fourth quarter is the stuff of legend. To do it in the playoffs, on an 8th seed against a #1 seed, no, THIS #1 seed, is EPIC Nova. And it wasn't a quiet, Tim Duncan Nova, either. It was a stunning combination of floaters, jumpers, and mid-slash faders. All of this punctuated, of course, by the absolutely sick, mind-melting, ankle-breaking, tell-Daddy-you-love-him-now-sit-down-and-let-him-roll-them-bones, crossover into the step back three.

But it's tough to put in performances like that night in, night out. And although Johnson didn't exactly go Nova last night against the Rockets, he did put in a hard fought 41 minutes of basketball.

Only problem is Tim Duncan, Manu Ginobili and Tony Parker all put in 40+ minutes in our grueling double overtime win against the Mavs (Duncan led the charge with an epic 50 minutes performance). So in some ways, maybe tonight's match-up would be better characterized as everyone vs. their own stamina.

This is going to be a tough game for both teams. Since rocketing out of the gate to a 6-0 start, the Hawks have given up 8 of their last 12. And, as the Atlanta Journal-Constitution rightly noted, a road trip to Texas is not an easy place to recapture your stride. Despite the Hawks' inconsistency, this remains a dangerous team. Johnson, Horford and Smith can all explode at any moment. Atlanta has a volatile brand of unbridled athleticism that cannot be equaled by any other squad in the association. But the cornerstone of their success remains Johnson. It is his quiet intensity that gives direction to Smith's unwieldy acrobatics and Horford's hard-charging diesel engine. 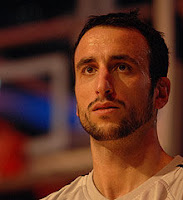 I've chosen Ginobili as Johnson's counterpart this evening not only because they are likely to be guarding one another throughout the game but also because this is where we need that little something extra that Manu brings to the table. In last night's win, Ginobili was an afterthought on both ends of the floor, despite seeing 42 minutes of court time. But tonight, he is going to need to be the centerpiece. Parker and Duncan (especially Duncan) are going to be tired. Bowen is going to be tired after his masterful defensive performance last night. Michael Finley played 37 minutes of basketball, so during the time he spends on the court it may seem as if the Spurs are playing with 4 guys. But Manu won't understand what it means to be tired. He will only understand what it means to win.

As I've said time and time again, no Spur is as blindly committed to victory as Manu is. If we are going to stop a younger, more athletic squad hungry for a marquis win, we are going to need the wily Argentinian to step up and lead.
Posted by Graydon at 2:55 PM

great call-out of MANU, and great response from His Awesomeness. that was clutch performance by The Sickness, and the whole team owes him big time for this victory, escpecially tony p. man, was he lousy last night. i guess something was bothering him, but still, he was awful. anyway, we got the win, and hopefully we get these next two games against weak teams.

Starter or Sixth Man, it's all the same when Manu starts rock and roll for the San Antonio Spurs. The outcome will always be the same.

You gotta feel the aura and the vibe when he makes his way from the bench into the court. The whole crowd will be on their feet waiting for something explosive to happen.

Check out my review on the Spurs/Hawks game.

great blog.. just found it today.just one comment though... you keep mentioning "MARQUIS"... i think you mean "MARQUEE"