Match-Up of the Night: Ginobili vs. Iverson

Although Duncan-Wallace is a classic match-up, I'm more interested in how Manu Ginobili and Allen Iverson effect tonight's Pistons-Spurs clash. Since picking up AI Detroit has gone 6-6 and at points has looked lost offensively. Conversely the Spurs have only played a handful of games with Manu in the lineup, and although he has been as dynamic as ever since returning, his minutes have been pretty limited (he has never spent more than 22 minutes on the court). These two explosive backcourt scorers are the biggest x-factors going into tonight's game. 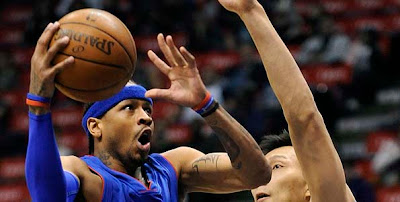 Iverson's characteristic ball dominance has created problems for this Piston's offense. The Piston's offensive production always blossomed out of the fact that all 5 of the 5 guys on the floor were committed to selfless play. A team-oriented attitude has been the rule. Iverson's willingness to create for himself has changed this dynamic drastically. Since trading Billups to the now-surging Nuggets, several players on the Pistons are scoring less points per game. At first glance this makes Joe Dumars look foolish but take a look at their long-term salary management and you'll get a sense of why I still think the Billups-Iverson trade was a clever move.

Iverson offers the Spurs an opportunity the Piston's never previously allowed: the opportunity to allow Detroit to beat themselves. If a large percentage of the Piston's FAs are coming out of Iverson's hands, the Spurs have a great shot at winning this game. Even if Iverson heats up, the key is taking everyone else out of the offense. We have deployed the same strategy with Steve Nash and Chris Paul in the past: Let the point guard have his shots but limit his ability to integrate his teammates into a cohesively functioning offensive unit.

I think the key to making this happen is putting either Parker or Ginobili on Iverson and letting Bowen cover Hamilton. Again, there is a parallel to the Hornets. For the first 2 games of the '08 Western Conference Semifinals Popovich had Bowen cover Paul and Ginobili et al. cover Peja Stojakovic. While pursuing this defensive approach we went 0-2. Then Pop switched Bowen onto Peja and Parker/Ginobili onto Paul and the Spurs won 4 of the next 5.

I think we can produce a similar, if not greater, effect this evening: If Bruce (I am basing this off of the assumption that, despite mediocre play, Popovich will still give Bowen solid minutes) can lock-down on Hamilton, Iverson won't be inclined to work in order to get Rip the ball. But if Bowen is placed on Iverson, not only will he be able to penetrate, but other Pistons are more likely to be found open on the perimeter. 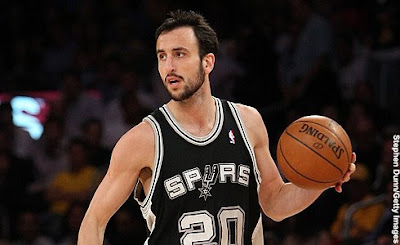 The flip-side of this issue is Detroit's decreased defensive prowess in the backcourt (Enter Ginobili). Prince is still a versatile defender (and the highlight reel of his post-season blocks is a personal favorite) but without Billups by his side Tayshaun is going to have his hands full. This will only be complicated by the absence of Antonio McDyess, whose inside presence helped disrupt penetration by Parker and Ginobili as well as mitigate the effectiveness of the Spurs inside/outside game.

Ginobili hasn't seen a lot of minutes since returning but a poor offensive performance by the entire team against the Rockets in Houston on Saturday gives me hope that Popovich might let him off the leash a little bit. Nobody on the Spurs has as diverse an offensive game as Manu: His ability to shoot the 3-ball, pull-up for the mid-range jumper and finish at the hoop will be highly problematic for a Pistons backcourt that has yet to gel. If Popovich allows Manu to play for long stretches, it may be unclear to Michael Curry how to best allocate his defensive resources. Number 20 is just the beginning of their problems: Handling any combination of Manu, Parker, Mason and Hill will prove to be difficult with AI in the game.
Posted by Graydon at 12:01 PM