Match-Up of the Night: Hill vs. Westbrook 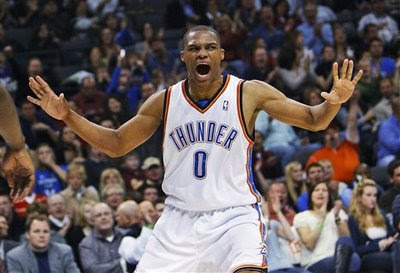 Tonight's game against the Thunder features an opportunity for young Mr. Hill to show up yet another highly hyped draft pick who he has outperformed this season: Russell Westbrook.

In some ways Westbrook and Hill remind me of one another. Both possess a malleable athleticism that could develop into a dependable offensive attack and both were already reliable defenders upon entering the league. But their paths since entering have been decidedly different: Westbrook has slightly underperformed expectations (only slightly), making only .378 of his field goals and turning the ball over 2.75 times a game. In his defense, Westbrook's induction into the NBA is something attune to a baptism by fire given that he's playing for what very well may go down as the worst team in the history of the league. It's gotten so bad that Thunder bloggers are now seriously considering whether or not OKC would beat the North Carolina Tar Heels (I believe they would).

Hill, on the other hand, fell comfortably into the tutelage of a two-time MVP and a first ballot Hall-of-Fame coach. While there he has flourished, discovering an offensive game that looked non-existent during the Summer League as well as improving upon his already respected defensive abilities. He still maintains the third best PER in the league amongst rookies (only Marreese Speights and O.J. Mayo are better). Hill continues to show some inconsistencies (for instance, he plays drastically better at home than away) but as he matures his numbers will surely become more steady. The game begins tonight at 7 Eastern/6 Central in San Antonio.
Posted by Graydon at 9:58 AM

what happened to PtR.com? It says no server to handle request.

here is the video of George Hill, in Spurs vs Nuggets game. Hope you guys enjoy it.

BTW, what happened to the game vs Thunder? No defense?

I recommend to watch it in high quality.