Match-up of the Night: Parker vs. The Entire Timberwolves Lineup 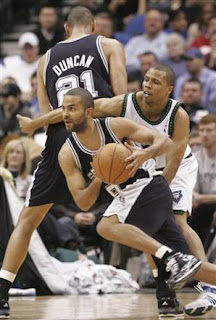 On November 5th the Spurs logged their first win of the season in a grueling 2OT time victory against the Minnesota Timberwolves. If it weren't for the heroics of Tony Parker, who scored 55 points, the Spurs would have surely dropped to 0-4. Parker scored at will throughout the game, but was most impressive during the two overtime periods. If the Wolves are going to be competitive, they are going to have to slow him down.

This is not to say Parker is unstoppable. He certainly didn't look so on Wednesday against the Hawks. His 6 point, 2 rebound, 3 assist game may have been his worst of the season. That being said, Parker is unlikely to have two mediocre outings in a row. Tonight could be a big night for the speedy little Frenchman.

In some ways the November 5th game against the Wolves feels like a lifetime ago. As the only positive part of our 1-4 start, that whole moment feels like a bad dream given the 12-4 record we have racked up since then. That being said, in order to truly exorcise the demons that have haunted us since early November, the Spurs need to win convincingly. What is so quietly disconcerting about our first game against Minnesota is that it took us 2 overtimes to beat a pretty bad Minnesota team. Re-establishing the notion that the Spurs win the games they are supposed to and win them consistently will go a long way towards putting the silver and black back in the title contention discussion (which for all intents and purposes, we are already in). The game starts at 8 Eastern/7 Central.
Posted by Graydon at 2:54 PM

Tonight both teams from the Southwest Division had big night for themselves. A big shout out to the Big 3s from Spurs and the Rockets. Looks like we finally have a great rival for the Lakers in the West. Though it may be a bit too early to predict such things, I’ll just keep my faith in both teams.

The Spurs were once again riding on their ace on the bench. When Manu gets in he just never stops delivering. Basket after basket and he makes it look so simple. The energy that he brought today was truly remarkable.

As a fan of Argentina’s basketball, I was more happy to hear about another Texas side big performance. The Rockets were just too much for the Warriors who had no answer against them.

I’ll leave you to check out preview from today’s NBA action, especially on the Spurs/Wolves and Rockets/Warriors game. Then you can share your feedback with us. Will truly appreciate it.

I have a question though.

I know Hill is not turning the ball over much. But it's just that i do notice that he is not really keeping the ball much anyway in many situations. I think it is nice to see that he is a willing passer. But maybe it has something to do with his dribbling skill that is not up to par with his athletic ability so that he couldn't help but give up the ball.

Let me know what you guys think. Thanks

Hill is not a refined ball handler, but he'll improve in time. He's learning a new position at point and is more accustomed to playing off the ball. In general, he dribbles the ball too far away from his body and he almost always goes right.

He's not awful, however. He is playing point for an NBA team...

I think he gives the ball up on offense because he is tentative (rookie) and sometimes defers too much to teammates. I'm not sure if that is also a handle thing or not.

The good news on Hill is that he is just scratching the surface of his potential. He's probably an NBA starter a year from now--at least on many teams he would be. Not for the Spurs, obviously.

Guess he dribbles the ball too far away from his body bc his arms are so long. Freakish.
Yes, and he only can go right..that is a problem I think. However, do you think it's due to his left thumb injury? He is still wearing that thing.

[He's probably an NBA starter a year from now--at least on many teams he would be. Not for the Spurs, obviously.]

--> Wow. this is a big statement. Think he can do that? I know he is a really good NBA defender already though.

We can keep him for three years though bc of his rookie contract.

The Spurs have Hill locked into a 4 year contract, and, you're correct, the NBA starter comment was a little strong.

Hill's left thumb is no longer an issue.