Match-Up of the Night: Spurs vs. Hornets 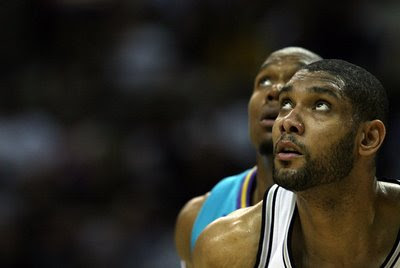 A founding tenet of Spurs dogma is the principle that regular season games should only be seen as a preparatory exercise for a deep post-season run. For the team's emotions to wax and wain too heavily with each rivalry game is to allow us to lose sight of the fact that the wins that truly count come in May and June. A win or a loss tonight will not dramatically effect our record, nor will it be a good indicator of what we are capable of come the postseason. The Spurs are the Jekyll and Hyde of the NBA: Coolly meandering to a 50+ win record before abandoning any sense of empathy in the merciless pursuit of more rings. It is almost impossible to assess the potential of Mr. Hyde by taking a good look at the achievements of Dr. Jekyll.

And yet I cannot shake the idea that tonight's game against the New Orleans Hornets is different. This is the first of four contests between these two squads but this one may hold a special place in directing the narrative arc of this budding rivalry. Last year's Western Conference Semifinal series was epic in scope yet schizophrenic in nature. Over the course of 7 games, the two teams scored nearly the exact same amount of points despite the fact that 6 of the 7 wins were considerably lopsided. Many thought that the series might signify a passing of the guard in the Southwest Division, as one balanced, defensively-minded squad ceded its dominance to another. But alas, such calls came far too early. Those who prophesied the parting of Duncan and the coming of Paul did not realize that it is the big man himself who will decide when he and his Spurs recede into irrelevancy.

There are far too many important match-ups this evening to focus on just one, so I've decided to touch upon the three which I deem to be most critical: Bowen vs. Peja; Parker vs. Paul; Duncan vs. Chandler. 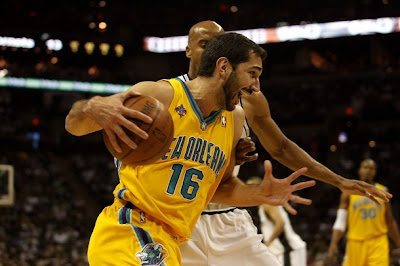 Heading into the 3rd game of the Western Conference Semi-Finals, Popovich made a strategic adjustment that would permanently change the course of the series. He moved Bruce Bowen off of Chris Paul and onto Peja Stojakovic. This turned out to be a brilliant move on Pop's part, as Peja would become an increasingly irrelevant factor in the series and the Spurs would go on to win 4 of the next 5 games. Hopefully Popovich will remember Bowen's performance in the latter half of the series and leave him on the lanky Belgradian.

Peja, at age 31, is no longer a threat to score off the dribble. The majority of his offensive production is based off of catch-and-shoot opportunities. When you have a guy who can slash-and-dish like Paul can, those opportunities arise often. But Bowen has the ability to negate Peja's presence on the floor almost entirely. Bruce will not merely smother Peja if he ever receives the ball, but he is one of the best defenders at ensuring that the man he is guarding never touches the ball in the first place.

This is why Bowen is so much more effective covering shooting guards than point guards. Yes, Bowen can prevent penetration or make it difficult to pass, but he is at his most potent when denying the reception of said pass. As always, don't expect Bowen to put up big numbers this evening. For a better sense of how well Bowen played, note whether or not Peja's points reach double digits. 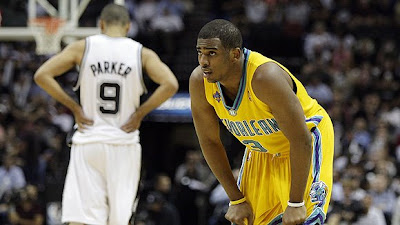 Without a doubt, this is considered the marquis match-up of the game and rightly so. Paul has the hands of a magician and the soul of an enforcer, both neatly packaged in his relatively petite 6 foot frame. Across the aisle stands Tony Parker, similarly diminutive and equally unguardable. Their off-the-court friendship led to some spectacular on-the-court theatrics last year, as both players would oftentimes entirely forget about the other 8 men on the floor and go shot-for-shot.

In some ways, that is exactly what we want out of Paul. If Paul scores 30 points, but is held to single digit assists, the Spurs are much more likely to leave New Orleans with a victory. If Paul is able to fully integrate West, Chandler, Posey and Peja into the game, then the Spurs will have quite the offensive force on their hands. The goal is not to stop Paul from putting on a show; the goal is to disrupt the cohesion of the Hornets' offense as a whole.

For the Hornets, I think the goal is to hope Parker isn't making his mid-range shots. Beyond that, I've yet to decipher how one would best shut down Parker's game. Certainly the primary goal has to be preventing penetration, but Parker's explosive quickness makes achieving such a goal unlikely. The better bet seems to be to give Parker space near the outside and hope he takes the bait. Although, given the fact that Parker has made 54% of the shots he's taken between 15 ft. and the 3-point line so far this season, it's an increasingly risky wager. 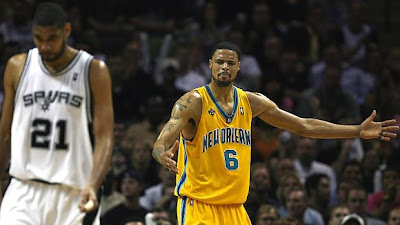 I'll admit it: During last years playoff series, Tyson Chandler did as good a job covering Duncan as anyone has. After averaging 22.5 ppg and shooting 65% from the field against NOLA during the regular season, Chandler held the Big Fundamental to just 15.3 ppg on 42% shooting during the playoffs. If Chandler can muster a similar level of defensive prowess again tonight, the Spurs are in for a long 48 minutes. Duncan has his hands full on the defensive end of the ball as well, as he will be covering David West while having to simultaneously prevent Chandler from connecting with Paul for one of their patented alley-oops.

This is the least predictable of the three match-ups, partially because Chandler has recently missed some time due to injury, partly because you can never confidently say anyone in the league can handle Duncan. But Chandler is the type of physical frontcourt presence who is more than prepared to give it a shot. The key against a player like Chandler is to establish yourself early: Chandler thrives on momentum. If you allow him to control the glass or deny you shots from the outset, you better be ready for him to cause hell for a full four quarters.