Match-up of the Night: Nowitzki vs. Duncan 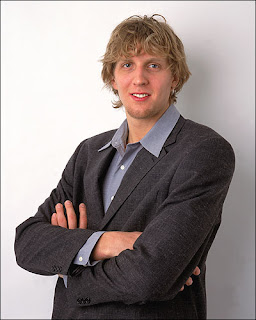 Having won 9 of their last 10 games, the Mavericks seem more than prepared to defend their home floor against a surging Spurs squad that has won its last two games in increasingly impressive fashion. Both teams began the season in relative disarray and both teams seem to have now found their stride, each possessing an 11-8 record. Dallas' recent success has been built upon the inspired play of Dirk Nowitzki, who received this past week's Western Conference Player of the Week Award after averaging 30.7 points and 10 rebounds over the course of three games. In order to slow down Dallas, the Big Fundamental is going to have to figure out a way to slow down the Blond Bomber.

In our first meeting Nowitzki torched the Spurs for 30 points on root to a 98-81 Dallas victory. This isn't all that surprising. As we have noted time and time again, the Spurs frontcourt struggles against post players who are comfortable shooting from 15 ft. or farther (in essence, Dirk). In order to slow down Dirk it's important that Duncan (or possibly Bonner) feel comfortable chasing Nowitzki out into the mid-range. For this to happen, our guards must a) consistently prevent penetration by the Mavs backcourt and b) crash the boards. Whoever is matched up on Nowitzki will have more liberty to follow him if he feels his duties protecting the basket and cleaning the glass are being handled by the rest of the team. Luckily we have an excellent rebounding backcourt and solid perimeter defense. This is a completely achievable set of goals.

As far as Duncan goes, it's no secret that everything runs more smoothly when the big guy is in the groove. The Spurs offense has been clicking on all cylinders recently, but that begins and ends with Duncan's ability to draw two defenders, produce second shots by dominating the glass and get to the line. In order to take down a Mavericks team that is looking to add another statement game to a run that already includes notable wins over Houston, Phoenix and Atlanta, we are going to need Duncan to remind the people of Dallas why our former MVP also bears the title of NBA Champion. The game tips off in Dallas at 8:30 Eastern/7:30 Central.
Posted by Graydon at 1:40 PM