Match-Up of the Night: Jackson vs. Mason 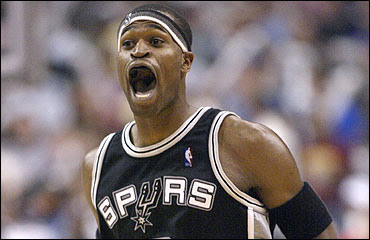 Tonight's Warriors-Spurs game features our newest gunner against an old favorite. It's always a pleasure when S-Jax comes back to town. His prolific 3-ball, booming enthusiasm and emotional depth (Duncan has at points referred to him as the best teammate he has ever had) made him a centerpiece of some of my favorite memories from that 2003 championship run. Mason has a long way to go before he holds a similar place in my heart to the one Jackson does.

But Jackson also offers some interesting challenges for this Spurs squad. As I mentioned in my Spurs-Nuggets recap, since Parker and Ginobili's return the silver and black have had less issues with talent and more with execution. Well, Golden State is the type of team that tempts you into executing poorly. Jackson will shoot without regard for pace or positioning, and it takes a hearty helping of self-control to keep the game plan intact. The Spurs have proven time and time again that they can control the pace and structure of games against Nelson-led teams, but it's time for our newest addition to prove he is up to the task as well.

There is a subtle line to be walked here: Mason has shown he has confidence, and at points (such as the closing seconds against the Clippers) true guts. But knowing how to harness that confidence so that it doesn't turn into self-destructive bravado is key. The Warriors do an excellent job of making it difficult to walk that line. 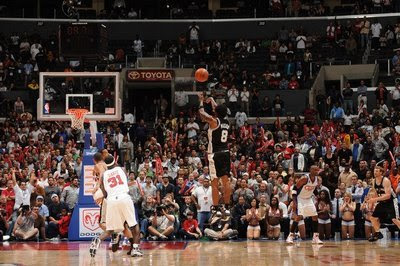 The other key to this game is closing out on perimeter shooters, something we did poorly against the Pistons, and in all honesty, could have done better against the Nuggets (whose shots really weren't falling anyways). Don't be surprised if you see a more even rebounding distribution this game than last, not because we aren't hustling for boards, but because against the Warriors Pop likes to drop one or even two men back after every shot to take away the fast break. It's a surprisingly tough assignment against GS, because instead of just heading for the paint and cutting off the drive, you have to be just as prepared for a warrior to perch anywhere along the perimeter and chuck. I can almost assure you Mason will consistently draw this assignment.

On a brief personal/editorial note, I am in Pittsburgh visiting my family and subsequently won't be watching the game (instead my grandfather and I are going to watch the De La Hoya-Pacquiao fight). Typically I would watch the game the next day and write a recap but I'm going to Steelers/Cowboys tomorrow, so that's not going to happen either. Sorry about that. Enjoy the game, everyone.
Posted by Graydon at 1:21 PM