Match-Up of the Night: Duncan vs. Jefferson 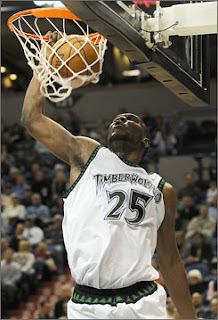 In his first two games against the Spurs this season Al Jefferson played impressively, scoring 29.5 points and hauling in 13.5 rebounds per contest. Although the Wolves dropped their most recent game (in fact, they are on a 12 game losing streak), Jefferson put up some gaudy numbers against the Rockets (34 points, 13 boards, 4 assists, 2 steals). If Duncan, who saw plenty of rest last night as we cruised to victory over the Kings, can slow down Jefferson this Wolves team will have a difficult time staying competitive.

Even if Jefferson has a good game, Minnesota will have a difficult time toppling the Spurs on their home floor. Although on the second end of a back-to-back, Most of the Spurs' core producers saw plenty of rest last night and will most likely have enough wind in their sails to maintain control for a full 48 minutes.

I'm in Texas pretty infrequently nowadays, so I'm again cutting this evening's "Match-Up" short because I'm headed back to SA for the second night in a row. Enjoy the game.
Posted by Graydon at 1:33 PM

Labels: Match-Up of The Night