Match-Up of the Night: Mayo vs. Ginobili 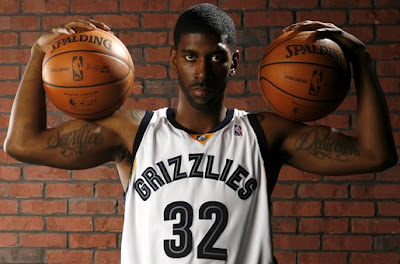 Although I would argue Derrick Rose is actually the most skilled member of this most recent rookie class, the most electrifying to watch is clearly O.J. Mayo. I never thought he was all that special of a prospect in college: Sure, he had all the athletic talent in the world but I never saw him translate that athleticism into the on-court theatrics we have seen so far this season. Without a doubt the most brilliant maneuver by the Memphis front office in recent history is the decision to trade Kevin love for Mayo (I saw Love on Tuesday when the Timberwolves lost to the Spurs in SA. Love, a future role player at best, possesses nowhere near the talent nor the intensity that Mayo has).

Mayo is also the key to any chance the Grizzlies have to win a game against the Spurs. San Antonio has had a tendency to play down to its competition. The Spurs' slow pace of play and Popovich's incessant roster tweaking oftentimes make it hard for the silver and black to put away teams they should be beating easily. From what I can tell, there is nothing Mayo thrives on more than late game drama. If the Spurs allow the Griz to stay within striking distance, young Mr. Mayo's hot hand may be able to deliver an upset.

Coming of the opposing bench is the wily Argentinean. Although my love for Manu knows no bounds, his return to the squad so far this season has been slightly underwhelming. Statistically, he is down in almost every category from last year: PPG, FT%, FG%, 3PT%. At first I thought some of these statistical slides (in particular PPG) were because Popovich has been giving Manu significantly less court time in the wake of his surgery (He is averaging 25.6 minutes per game compared to last season's 31).

But a look at Hollinger's PER reveals that Ginobili's efficiency is down significantly. Last season he logged an impressive 24.07 PER (second only to Kobe Bryant). This season his PER sits at 19.87. It is still the sixth best in the league for shooting guards, but hardly as gaudy an efficiency rating as he was able to attain last year.

Yes, Manu is not as explosive as he once was but that does not explain it all. During his entire tenure with the Spurs Manu has played with a reckless abandon that is absolutely infectious. This season I have only felt the effects of such glorious infections every so often. Against a team like Memphis is an excellent opportunity for the sickness to rediscover his deadly potency.
Posted by Graydon at 3:14 PM

Manu clearly is not 100 percent yet and Pop said so himself. I think we should be patient with him. I really hope he gets 100 percent as the season goes on.

If Manu becomes Manu that we know and love, do you think we will still have a chance to beat the Lakers who clearly look better on the paper.

When do we meet the Lakers? Really?

The Grizz were as stubborn as hell but the man that drew the line was wihtout doubt Manu Ginobili.

He was there to compensate Roger Mason from the bench. Though many would argue why he isn't a starter but I think Pop knew in what ways Manu contribute's best for the team.

I have to agree with the earlier comment that we still haven't see the Manu of last season. But he is getting there.

It's still hard to tell about which team that dominates the West though it looks like Lakers. But come playoff time, it can a whole lot of different story.

Here is my recap of the game, appreciate you drop and give your thoughts as well.