Match-Up of the Night: Duncan vs. Howard 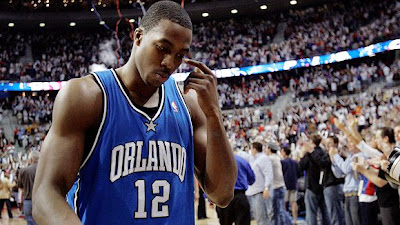 The Spurs roll into Orlando today to take on the toughest Eastern Conference opponent we've faced all season (if you are being intellectually honest, you will admit the Magic are currently better than the Pistons). Tangling with the Magic inevitably brings Duncan-Howard comparisons, so why fight it?

Howard is the most electrifying frontcourt presence since the young Shaquille O'Neal. His athleticism is unparalleled in today's game and I would argue that, if he shows the discipline to really develop a sophisticated offensive arsenal, he could permanently change the way we conceive of the position of center. He does his most magnificent work in the air above the rim, throwing down far more dunks than any other player in the league.

Even more magnetic than his play is his personality. Howard is a fountain of whimsy. Few players can more often be caught with a smile strewn across their face. Only 23 years old, Howard's proclivity towards dunking seems to derive more from a childlike belief that dunks are fun than from any attempt to intimidate.

Across the paint from young Howard stands the Big Fundamental himself. Tonight's game is no sort of test for Duncan: He has made a career out of outmaneuvering and outsmarting more athletic big men (Young Shaq, Amare). But it is an excellent test for Howard. Can one of the NBA's newest stars handle Duncan's crafty footwork? Has Howard developed the sophistication to finally contend with Duncan's clever positioning? Tonight will be an excellent barometer to see how far the reigning dunk-contest champion has come.
Posted by Graydon at 1:53 PM

If I were Dwight, I would make "Fountain of Whimsy" my official epithet.