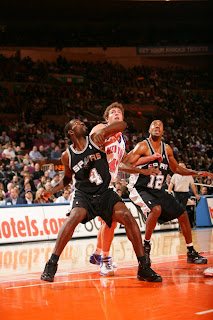 Although Popovich's affinity for wily veterans traditionally transcends any recognition of their actual physical abilities, expect to see a much younger version of the Spurs over the next couple of weeks. Until tomorrow evening we won't be able to say for sure whether or not Pop feels the current state of affairs is so dire that the starting lineup must be restructured (it must) but if Friday's game is any indication, I am confident some of the rooks will be seeing solid minutes.

For long stretches during the second half of the Miami game, Anthony Tolliver, Desmon Farmer, and George Hill (all rookies) could be found on the court simultaneously. Like any good Spurs fan, I fear change, but this is the change we need. The old guard has crossed a treshhold.

Despite my pre-season optimism, I hinted that these changes might be necessary. I suggested that both Bowen and Finley should come off the bench and probably see less minutes, although I also acknowledged that Pop's personal history with each would make this considerably difficult to bring about. But when I went back and watched Friday night's game again, it seemed to me that Pop was drawing a line in the sand: Hustle or sit your ass down.

Now typically the elder Spurs can be counted on to overcome their creaky knees and aching backs and show some desire, but both Bowen and Finley have looked uninspired. The only vet on the team (none of this includes Duncan) who has shown any aggressiveness has been Kurt Thomas. I don't mean to be cynical, but there is a negative correlation between championships won and hustle being shown.

In some ways, this was all inevitable. Bowen has always been bad at dribbling, passing, shooting, you know, all that stuff that basketball players do. Eventually he was going to lose a step or three and that would be that. Despite having a poor shooting season last year, somewhere in the back of my mind I actually thought Finley could be productive for longer. Yes, he would become an increasingly severe defensive liability but I expected his sweet stroke to stick around. A whopping .268 FG% through 5 suggests I was wrong.

Looking back, Finley and Bowen's lack of intensity may be the unrecognized cause of other breakdowns. I, like many Spurs fans, was very frustrated when Duncan and Parker missed 2 late 3-pointers to tie up the opening regular season game against the Suns. But when I thought about it again, I noted that Finley and Bowen eschewed the off-ball movement that produces open looks and instead sat placidly along the arc while our two worst three point shooters were forced to step up. I am not trying to blame Finley and Bowen for that loss, a lot of things went wrong that game. I am just saying that, given what we know now, their current state of play did not arrive without the requisite foreshadows.

Will playing Tolliver, Farmer, and Hill more often solve this team's problems? Of course not, but we will genuinely be better. Look for our defensive efficiency to climb out of the cellar, as Tolliver and Hill are already solid defenders despite having played only a handful of NBA games. Look for our offensive efficiency to slip because of Parker's absence, but our points per game may creep up as Tolliver, Udoka, and Farmer are a stronger collection of perimeter shooters than Bowen, Finley and Udoka are at this point. Listen, anybody who tells you this isn't going to be a tough stretch for the Spurs is lying. But if we remain blindly attached to the personnel choices that brought us success in the (increasingly distant) past, we will experience little success in the future.
Posted by Graydon at 7:46 AM