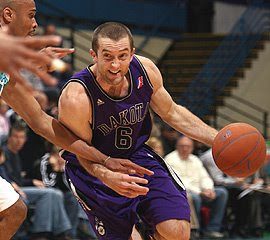 When I heard the Spurs were cutting Desmon Farmer and calling up Blake Ahearn, I was ambivalent. I liked Farmer just fine. He seemed to be exactly what I expected him to be: a decent shooter whose game was limited beyond that. But the DNP-CDs he earned the last two games didn't bode well for last year's D-League scoring champ. He took some liberty on the offensive end which may have raised some eyebrows on the coaching staff but in all honesty he probably just didn't show the high level of commitment on the defensive end of the court that is so essential to earning minutes with this team.

And then there is Blake Ahearn. Who? That's pretty much what I said until I got a call from my good friend Matt Moore who is a well-known Spurs hater/D-League aficionado. I didn't expect the call, and I definitely didn't expect him to be excited about Ahearn's arrival in San Antonio. In Moore's opinion Ahearn is a crack shot from both the line (he still holds the NCAA record for best career FT percentage) and the field who shares the humility and tireless work ethic that forms the bedrock of the Spurs collective ethos. For Matt's extended thoughts on the matter, check out a profile of Ahearn he wrote back in February.

48 Minutes of Hell Contributor Timothy Varner was more hesitant to give the move his endorsement:

I don't think Ahearn is a lock to play. He's a third string point, at best. The Spurs did this same thing last year with a merry go round of call ups. They like to award 10 day contracts that function like extended interviews. It's more about whether the guy will fit in the locker room, and all that. But they already have 3 points, so unless Parker is injured for longer than we expect or Vaughn is gone...

The other possibility is that they want a premier D-League point to run the show in Austin to help the development of their young players, but this is doubtful.

Farmer can only score, and didn't in his limited minutes. It's pretty obvious by now that when healthy Parker-Hill, Mason-Ginobili is the best back court in the league, and will provide plenty of scoring from those positions. Hairston fills a hole at 3, but I'm not sure what Ahearn brings to the table other than great shooting and zero athleticism.

I told Tim to take a glance at Matt's profile and although it didn't exactly change his mind, he had some further thoughts on the matter after giving it a read:

1) It is possible the Spurs would like to groom a back up third point to replace JV next year, and giving a guy a year in the system before expecting anything of him is smart.

2) He's a Spur in terms of character--hard working, unheralded, driven...

But again, I'm not too concerned about Ahearn until he lasts through his two 10 day contracts. I've seen this movie before.

I believe Ahearn will suit up for the Spurs this evening when the silver and black travel to Sacramento to take on the 4-6 Kings. The game begins at 9 Eastern/8 Central.

UPDATE: Ahearn did not play this evening, although the Spurs did sneak out of Sacramento with a 90-88 victory.
Posted by Graydon at 10:35 AM