Match-up of the Night: Hill vs. Rose 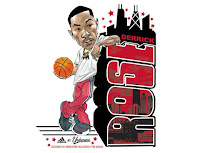 I'm tempted to make George Hill half of the match-up of the night nearly every night and this evening I'm giving into temptation. No showdown so far this year has excited me more than George Hill's first opportunity to tango with Derrick Rose. This is not merely a chance to get a look at the much heralded number one pick but also for Hill to make a statement.

Rose has immediately lived up to the hype surrounding his selection by the Bulls. He confidently and quickly stepped into a leadership position, an absolute necessity for a Bulls team that had been struggling to regroup after an underwhelming season on the parts of Hinrich, Deng, and Gordon derailed a fair amount of optimism regarding the Second City's playoff chances. In the lead up to his professional debut, analysts argued over whether Rose was more of a pure passer or a potent scoring threat: Early season evidence suggests that he is a potentially franchise defining combination of both. Trust me, Spurs faithful. I live in Chicago and subsequently watch the kid often. He is the real deal.

Honestly, I am most impressed with his will to win. It's an intangible description that I'd prefer avoid if it weren't so glaringly obvious. When the rest of the team seems sluggish and disorganized, he is nailing mid-range jumpers, getting to the line, hustling on D, and pretty much doing whatever it takes to keep this team competitive.

And yet, according to one Mr. John Hollinger, Rose is not a considerably more efficient player than our own George Hill. Amongst rookies, Rose has the 4th highest PER with 18.33. Hill trails closely behind in 5th place with a PER of 17.95. Hollingerian metrics are not traditionally my go-to tool for defining a player's worth: I have always prefered to listen to what my eyes tell me.

And my eyes tell me George Hill is one of the most underrated rookies in the entire Association. If you read this blog often this is not surprising to hear me say. We have been one of the few voices singing Hill's praises. Originally I characterized him as merely an NBA-ready defender, but after several 20 point games in a row it is impossible to deny his offensive prowess.

Although traditionally attracted by gaudy numbers on the offensive end, I think the media will be more excited by a passionate and unyielding defensive performance on the part of Hill this evening. No one seems to care when Hill leads the team in scoring, but stop (or at least slow down) the meteoric Rose and I bet young Mr. Hill's name finds itself on the lips of a few more talking heads.
Posted by Graydon at 2:26 PM

I would say you were accurate. Let's see if anyone outside of San Antonio discuss Hill's performance.