The Return of Manu 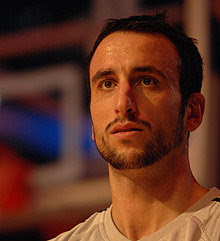 According to Jeff McDonald at the San Antonio Express News, Manu will play tonight against the Grizzlies. Obviously his return spells an end to what has been a trying time for the silver and black but questions still remain.

As Tim noted a couple of weeks ago, rushing Manu back could lead to further problems in the long run. It is immensely more important Manu be at 100% in May than he be on the court at all in November. That being said, I don't believe we are rushing him back for two reasons.

First, Popovich is notoriously conservative about his management of player's health. If he thinks someone isn't ready to go, they aren't going and that's that. But more importantly, the situation in San Antonio isn't dire. In fact, many Spurs fans (myself included) are surprisingly optimistic. Once Tony joined Manu in street clothes many of us saw catastrophe on the horizon. I even had a couple of people suggest to me that we bench Duncan and make an unashamed run at the lottery.

Well, here we are, 12 games into the season and the Spurs have proven that with an extremely handicapped backcourt we are still a .500 team. Both George Hill and Roger Mason have surpassed expectations, Duncan has been unflappable (as if there was any doubt), and Michael Finley, who many had left for dead, has found a way to recapture that sweet stroke that brought him to San Antonio in the first place.

Add a hungry Manu Ginobili to the mix and I wouldn't expect this team to hover around 8th place much longer.

Still, don't expect an explosive performance from the Argentinean this evening. Sure, he'll get minutes, but even he himself admitted that he probably won't see as much court time as he would when fully healthy. Given some of the roster moves we've been making (recent starting backcourts have included almost any combination of Finley, Mason, Hill, and Bowen), I'll be intrigued to see if Manu remains in his mythic sixth man role (he most likely will).