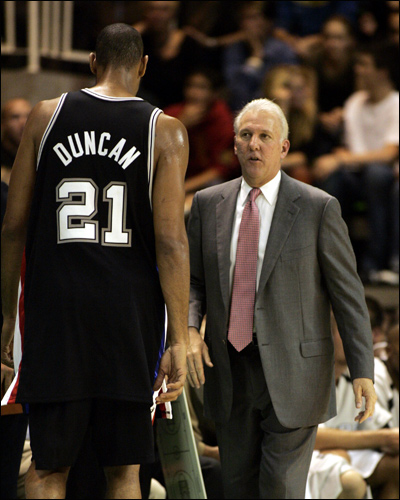 A New Mood
"At one time the future did stretch out before me," Morrissey sings, "but now it stretches behind." There is a time in life when opportunity is ripe on the vine, and there comes a time when it hangs rotting. Basketball fans know the feeling. Spurs fans look to tonight's game against the Knicks with a sense of wonder. Is the harvest done? Should we pack in for a cold winter? Are the Spurs rotting on the vine?

For some teams this year is always about next year. They're stuck in repeat. "If this now, then maybe that later" is their song's refrain. But it never comes together, and next year is this year all over again. True fans wait, and wait longer still, for the cycle to break.

Not so for Spurs fans. This year is always about winning this year, and any thought of the future is just icing on the cake. They read the box scores as people of privilege. They know the harvest is plentiful.

The Lottery?
For the first time in a decade, basketball fans are openly questioning whether the Spurs franchise is better served to find a place in the draft lottery, whether to accept the fact that the winds of change are now blowing in their face. In Monday's SportsNation chat, John Hollinger was asked this very question and said the following:

I don't think picking in the 8-to-15 range really helps [the Spurs] that much -- look at the quality of players typically selected in that range. They'd have to win the lottery or come close to it to get somebody who is likely to make a major impact while Duncan and Manu are still in their primes.

In addition to this, drafting, say, 9th or 10th, poses the disadvantage of complicating the cap with a player loaded with "ridiculous upside" but who is, nevertheless, doubtful to actually play. He is Mr. This Year for Next Year. Such complications are nice to have, and no one doubts the Spurs would make good on a quality pick, but I'm sure the Spurs front office did not project such salary holds into their near-future cap strategy. Meanwhile, the old stand-by draft and stash tactic has been rendered problematic by the value of the dollar. On the other hand, if the Spurs make the playoffs, their pick goes to Oklahoma and they simply proceed as planned. It's neat, it's tidy, it has been predicated.

All things considered, the Spurs are in a tough spot. This is not a situation where losses now will eventuate into more wins later. The middle of the pack is the last spot they want to finish. Middle of the pack is the rut that relegates a franchise into the this year for next year cycle. As Kurt Vonnegut would say, and so it goes.

Back Away from the Cliff
The good news is that the Spurs faithful can back away from the cliff. The Spurs are going to be fine, although this season may present something of an injury-riddled struggle. Cribbing once more from the pen of Hollinger, "It's a testament to San Antonio's success during the past decade that not one exec I talked to the past few days would even consider the idea of this team's failing." The Spurs' core is in tact, they're not entirely bereft of young talent, and their cap situation is tight, but smartly managed.

The next 4 weeks represent a pivotal moment in the life of the franchise. While .500 should be the goal, it would constitute a significant achievement. Over the next 15 to 20 games, Gregg Popovich and Tim Duncan must test themselves against unfamiliar fires. Their goal is not to win, but to figure out how to win. Popovich likes to say that the Spurs play each season to get better by the end of the season, and that's never been more true.

The Spurs current roster is an unworkable mixture of guys who are new to the league and those who ought to leave it. I would argue that the team's core is no longer Duncan, Parker, Ginobili and Bowen. Instead, the team must assemble its future talent around Duncan, Parker, Ginobili and Mason. The difficult task for Pop and Duncan is figuring out how to effectively incorporate the new talent and still squeeze the old guard dry, but do so while phasing it out.

It's On Pop and Duncan
The Duncan Era Spurs have never faced such a stiff regular season challenge. Not only must Duncan put up MVP numbers, but he must do so while elevating the play of last breath veterans and don't belong rookies. If the Spurs finish this next month at anywhere near .500, Tim Duncan will have played the best regular season ball of his career.

The same is true of Popovich. Can he make the Spurs better while his left hand juggles balls that don't know the system and his right handles those who can no longer execute it? There is a sense in which Pop has great liberty to figure out who can play, who can't, and what combination of players should surround the core, once healthy. The silver lining in the cloud of injury is that of available minutes. The Spurs will have to fight tooth and nail to make the playoffs, but they can greatly accelerate the development of their young players in the process. The front office has a short window to find a clear view: who can play, who is done, where are our most glaring holes, how can we cut dead weight, what does the core need at the edges? Once those determinations are made, they need to commit to the vision and proceed accordingly.

But Pop and Duncan face a yet more salient challenge: They must find a workable rotation while recovering their once lauded defense. No matter who emerges in the new look rotation, they must defend. In this sense, the Spurs should and will bite the bullet of offensive struggle, but only if they're losing games 85-78. Losses of 105 to 101 will find Popovich irate, and will see the Spurs with no hope of recovery.

There is a major difference between battling for home court advantage and battling for the right to play. The Spurs are up against an unthinkable moment of actual desperation. Their usual position of privilege, of fretting over whether their post season will be played on this beach or at that resort, has been displaced by the reality of an impoverished year, of life without vacation. They must play hard, living game to game, but may finish the season with nothing to show except the scars of unrealized labor. This is now a blue collar ball club which no longer has the luxury of skating 'til late before turning on.

The 4 Week Retool?
I'll be thrilled if the Spurs come through this stretch with few victories but a certain knowledge that George Hill, Ian Mahinmi, Anthony Tolliver, and, perhaps, Desmon Farmer are worthy of rotation minutes down the stretch. This, at least, should be the goal. This and keeping games "in the 80s or low 90s."

R.C. Buford recently remarked, “I think right now you'll probably see George get to play a lot,” Buford said, “and we'll continue to evaluate, not only our team but the NBA market, as we go along.” (italics added) This is nothing if not a tip of the hat to fans and team members alike that the usual sacrosanct status of Spurs veterans is no longer operable. If the Spurs are able to swing a trade that provides stop-gaps, then they'll make those moves.

Are the we-love-our-vets Spurs really ready to push a youth movement? Tim Duncan seems to think so. The Spurs are bringing new kids into the family, even if the process is like giving birth to an infant swaddled in sandpaper.

Tonight's contest against the Knicks is either the start of an improbable 4 week retool or one of many long sighs in a parenthetical season of frustration. I'll be watching closely, but I'm not too concerned if the Spurs win or lose. Will their play in this game make them better for the next?
Posted by Timothy Varner at 7:09 AM