Match-up of the Night: Hill vs. Williams

UPDATE: Williams participated in practice on Thursday and I subsequently assumed he would be playing this evening. But because of an ankle injury Sloan chose to withhold him from the game. Which pretty much means you can ignore this entire preview. 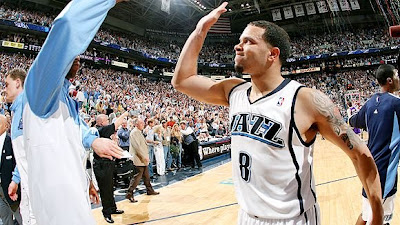 Spurs-Jazz always offers some great match-ups out there on the floor. If Spurs fans are looking for the feel good showdown of the night, keep your eyes on Tim Duncan as he defends Carlos Boozer. Boozer is a talented player but in past years Duncan has owned him, plain and simple. On Wednesday Duncan had his worst game in a little while so part of me expects him to play with an edge this evening. But we've seen that match-up dozens of times. My eye is going to be on George Hill as he squares up with one of the most talented point guards in the league, Deron Williams.

Williams is not unlike Hill's most recent opponent, Chauncey Billups. Both are smart, physical field generals who, at least according to my impressions, make similar decisions about when to shoot the long ball and when to head for the paint. I'll be excited to see if Hill is able to make any substantive improvements on the defensive end after having covered Billups on Wednesday. No team is as committed to the pick-and-roll as the Jazz and as Tom Ziller noted during his NBA Top 50 rankings, off the pick-and-roll "a PG FGA is the safest outcome."

With no passes involved, the chance for a turnover is reduced. If a PG can get off a decent shot, he should take it (unless there's a more decent shot for a teammate). This is where Williams is so good: making the right decision here. It often ends up in the hands of Boozer, but Williams is strong and unafraid to go all the way in himself. He reads the defense. As a result, he makes good decisions and boosts his stellar shooting numbers.

Given how well Duncan covers Boozer (and the pick-and-roll in general), I expect to see a lot of shots out of Williams. This will be a chance for Hill to step up and show that he can go pound for pound with one of the best (and if Williams goes to the hole it literally will be pound for pound). 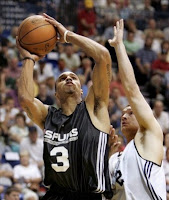 I'm also interested to see how well Hill can score against Williams. Hill had a big night against Billups and has the combination of power and quickness that can combat Williams' bruising style. The Jazz also have interior defensive issues, and if Hill (who is really the only slasher out on the floor) can get to the hoop, it will open guys up all over the court. But Williams, not having to worry about Parker or Manu, will stay home on Hill, while he typically has to worry about a second member of the backcourt (Ronnie Brewer and Kyle Korver cannot typically be counted on to stop Manu or Parker).

Previously Tim and I have discussed that if the choice is between Hill being too aggressive or being too safe, we would actually prefer him be the former. This is particularly true this evening. Yes, penetration disrupts any defense, but the Jazz are uniquely susceptible: If Hill gets into the paint, nobody will stay home and wide-open looks (as well as easy buckets for Duncan) will start appearing all over the place.

Make no mistake, this is a tall order for our roster's youngest member. He is going to have to stare down one of the best (some would say the best, although I wouldn't) point guards in the league. He is going to have to hustle on defense, as Williams is probably the most efficient scorer Hill has faced up to this point. And he is going to have to maintain his focus while getting mugged by a foul-happy Jazz squad. It's going to be a long night for the rookie but I think he's up to the task.

UPDATE: As his and Duncan's matchup played a supporting role in this preview, I think it is important to note that Carlos Boozer will not be suiting up for the game this evening. Supposedly he strained his quadriceps muscle on Wednesday night when the Jazz played Milwaukee. According to the article linked above, Mehmet Okur will guard Duncan, although as Jerry Sloan notes Okur at best "tries to. We've never had anybody guard him. That's why we've lost a hundred games against them."
Posted by Graydon at 9:17 AM