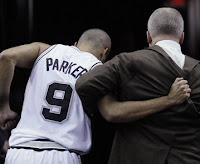 I’m back. Having sacrificed my time (and health) in service of the democratic process, I am looking forward to leaving civic mindedness behind for a bit and focusing on what’s really important: the San Antonio Spurs. I would like to thank 48 Minutes of Hell’s newest contributor, Timothy Varner, who in my absence guided this blog steadily through what has surely been a trying time for the Spurs faithful.

So here we are, one and a half weeks into the season and we find ourselves off to one of the worst starts in the history of the franchise. The first two losses, to Phoenix and Portland, are not that worrying. Against the Suns we had two shots to tie it in the final 30 seconds and against Portland we had a shot to win it. A loss is a loss, but nothing about the specifics of those two games tripped any alarms for me personally. If anything, our inability to beat the Timberwolves in less than two overtimes is more concerning. I think Minnesota is underrated and oftentimes last season played very competitively against tough opponents (Suns, Celtics). But it took career-defining heroics on the part of Tony Parker to earn the W, heroics that cannot be expected night-in, night-out and will be nowhere to be found over the next 2-4 weeks.

I think it is hard to overstate how difficult the next month will be for the Spurs. It already seems that I underestimated the effect that Manu Ginobili’s absence would have on the squad. Tony Parker’s injury will multiply our offensive difficulties exponentially. Our offensive efficiency rating is actually amongst the league’s best, but so much of that has been driven by Parker’s brilliance, Duncan’s consistency and Mason Jr.’s hot hand. Parker, currently the league’s leading scorer, had taken it upon himself to close the gap created by Manu’s injury. Without two of the big three on the court, losses are sure to pile up.

Now more than ever is the time in which Popovich needs to focus on the future of this team. Certain players, like Michael Finley and Bruce Bowen, are not a part of that future. Certain players, like Ime Udoka and Desmon Farmer, are. Even in the absence of Parker we have to change our rotation so that it reflects where this team is headed, not where it has come from.

Udoka should replace Bowen in the starting lineup and Farmer should begin chipping away at the number of minutes allotted to Finley. Bowen’s lateral quickness has eroded enough that his defensive tenacity no longer makes up for his limitations as a player in nearly every other respect. Finley, whose fire and wisdom I still admire, is a shadow of the scorer he once was. Even with the injury-plagued state of our backcourt, we have to start to transition away from the old guard and towards the new.

Leading into this season I was never concerned about age, although the play of Bowen and Finley suggests maybe I should have been a bit more. But I was extremely concerned about injuries. Our offensive fate is held in the hands of so few that one or two key injuries puts this team in serious peril. Well my friends, we have two key injuries (and even more than that if you include the injury to Ian Mahinmi).

Tony Parker’s injury causes a ripple effect of concern. I am also now worried about Duncan’s minutes. Our ability to make such deep playoff runs year after year has always been built upon the foundation of a well managed regular season. Popovich skillfully combines deep rotations and scaled-back minutes for our superstars so that come May a group of 8-10 guys is healthy and energetic. Given the amount of minutes Duncan will be required to play in the coming weeks I just don’t see how we can manage to exercise the same foresight.

So what is the goal? Be a .500 team in the month of November and early December. Forget power rankings or media buzz. The most important thing is that when our backcourt is at full strength, we are in a good position to battle back into playoff contention.
Posted by Graydon at 4:42 PM

Labels: State of the Season

Let's say Parker misses the full, minimum two weeks, and comes back for the Nov. 24th game against Memphis. That means he will have missed seven games. And I think the Spurs could very well be 1-11, even if a possessed TD throws up a 30-15 until TP gets back. They were struggling enough without Manu...and now TP is out...and outside of the Big Three, they have nothing, as far as I can tell. Duncan is competitive as hell, and knows he'll have to put up HUGE numbers for them to stay afloat, but, I wouldn't be too optimistic.

In 2003 the Lakers started 3-12 with Shaq as he recovered from off-season toe surgery. They wound up winning 50 games, but it took a lot out of them as they tried to catch up - quite a contrast to a typical season for the Shaq-Kobe-Phil Lakers, who tended to cruise through the regular season (similar to your Spurs). Also like those Lakers, those Spurs are an aging team with a thinned supporting cast complementing their stars. The Lakers ended up flaming out in the playoffs that year, in the second round, to a younger, fresher, up-and-coming San Antonio squad (hmmmmmmmmm - by the way, I'm sure you remember this well; as a Lakers fan, I'd like to forget). You can never count them out, but I don't see the Spurs making it as far as L.A. did that year. Antwonomous projects them as mincemeat for the Hornets in round one.

Whoops, at the start of the second paragraph I meant "with Shaq out."

I say we sit Duncan and make a run at the lottery.