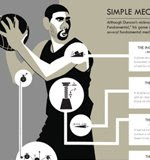 Yesterday evening I had the pleasure of attending the Free Darko book signing here in Chicago. We ate some really solid deep dish, watched the Cavs/Nuggets and the Warriors/Pistons and talked with Recluse and DLIC about hoops and what not. I also had the opportunity to meet Trey. He’s alright, I guess. If you haven’t had an opportunity to check out the book (which may be many of you, as it just came out on Tuesday) make sure you pick up a copy.

As many people have noted, it’s not just 200 pages worth of blog posts bound and printed. It is a lucid and thoughtful reinterpretation of the NBA that will be relevant for years to come. I am not sure their “manifesto” actually has the potential to replace traditional forms of basketball fandom, but it certainly has inspired me to move beyond my purely partisan sensibilities. Before FD, I was a Spurs fan. Since I began reading their writing several years ago, I have blossomed into a lover of the entire Association. I still balance my allegiance to the silver and black with my more liberated side (my only serious criticism of the book would be the idea that they do not give the potential for this balance sufficient consideration), but without a doubt their writing has changed the way I think about the game.

Although the Spurs are the epitome of being “anti-FD,” the Spurs lovers out there will be pleasantly surprised to find an entire chapter dedicated to Tim Duncan. For a group of sportswriters who have raised “style” and “personality” to fetishized levels, they are genuinely intrigued by the Big Fundamental. His placidity and lack of style are enigmatic. Duncan “redefines style to encompass elements completely devoid of stylishness.” Embracing negation as a form of positivity is an idea I have been a proponent of for some time. I have written about how defense can be understood as a form of self-expression, and although understanding Duncan’s offensive game as being stylish because it abandons any semblance of style has a modal difference in relationship to my thoughts on defense, I think they spring from the same fount.

In some ways, this entire chapter reads as a kind of “come to Jesus” for the Free Darko Collective. These writers, fully-throated proponents of the systems of basketball pioneered by coaches like Mike D’Antoni and Don Nelson, have for years been haunted by Duncan’s ability to magnetically attract on-court success. Countless numbers of FD’s patron saints have met their martyrdom at the hands of Duncan’s Spurs. And yet, despite a decade of frustration, even sometimes hatred, the men of FD have seemingly come to a place where they respect Duncan and the broader role he plays in the NBA:

Duncan is a vessel through which a beam of magnificence passes. He is the NBA’s designated holder of pure athletic dignity, the kind that danced around with ring with Joe Louis and that ran with Joe DiMaggio around the base paths. Duncan emanates such honor ad humility that many members of the media have idealized him, fashioning him as some sort of puritanical savior to the league. And although this status is somewhat over-blown, without Duncan, one wonders if the Association would ring hollow to the public, who might view it as merely a noisy shell of celebrity and finesse. Duncan keeps us honest. His righteous and calming presence provides balance-- and enables the NBA to unashamedly pursue its primary function as a flabbergasting playground for all to enjoy.

I think this season may show us new sides of Duncan that we have not previously seen. Tim has never faced hardship they way he will over the coming months. The Free Darko Collective admits that the potential of inner turmoil is what drives their continued interest in Duncan: “We watch perhaps the greatest power forward in the history of the NBA go relatively unnoticed among his flashier colleagues and wonder why he does not express frustration.” In order for the Spurs to make the playoffs, Duncan may have to play the best basketball of his career, something many commentators think is no longer possible. So far he has done a heroic job struggling to keep this team afloat, although with limited success. As the losses pile up over the course of November, I am intrigued to see to what extent Duncan’s inner peace will begin to erode. Faced with the specter of mediocrity, will the saintly giant reveal that even he too is fallen?
Posted by Graydon at 10:56 AM

Love the blog. I was riding the fence regarding buying the FD book, but I think now I'll dip into the savings and purchase a copy through the interweb.