Every once and a while the enigmatic Cody Adams stops by 48 Minutes of Hell to give us his take on one film from the canon of basketball cinema. This week he applies his wit and candor to the Spike Lee Joint, He Got Game. 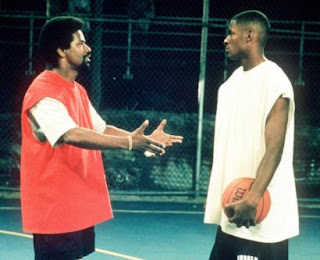 
Okay, I’ll actually write a review. Spike Lee’s contemporary basketball drama, which admirably takes place in Coney Island, is a puzzling little movie that lacks direction and frequently gets lost in its head-scratching stylistic quirks. I was actually pleasantly surprised by the movies opening minutes, which are comprised of an anarrative stylized faux-documentary montage of the color saturated urban landscape, set to emphatic orchestral music. It’s redolent of early abstract soviet documentaries in its emphasis on the human machine and the clockwork of society.

But then the movie starts. The basic (and implausible) plot is this: Denzel Washington, serving a harsh sentence for what turns out to be a fairly limp manslaughter killing of his wife, who sort of bangs her neck on a counter after he shoves her, is sprung out of prison for a week by a warden accommodating a basketball crazy governor who wants Denzel to convince his estranged super-athlete son to go to the governor’s alma matter. Whew! That’s pretty much the movie. Also, the tagline is “The father, the son and the holy game.” This is appropriate, as Denzel has named his son Jesus, and his son has turned out to be the best high school level basketball player in the country.

There really isn’t much drama, or basketball to speak of. Jesus is acknowledged to be the best rising star in the world, as attested to by annoying fake media collages of real-life NBA stars and coaches. We never really see this, however, and the main glimpse we get at his skill comes at the very end, where he is able to beat Denzel fairly easily at a game of one-on-one. Which isn’t all that impressive. Which leaves us with the drama. Clearly Lee was going for authenticity, casting Ray Allen, a real life professional basketball player, but the choice seems almost arbitrary given that we hardly ever see him play, and his acting is at times embarrassingly bad. His general mode of operation is marginally annoyed. People bugging him about what school he’s going to? Marginally annoyed. His sleazy uncle trying to bribe him with under the table gifts from boosters? Marginally annoyed. His convict father, who killed his mother, escaping from prison somehow to talk him into going to a particular college? Marginally annoyed. His girlfriend, ghetto beautiful Rosario Dawson, revealed to be on the payroll of a college to con him into going there? Marginally annoyed. When attempts at high drama are made the movie turns into an awkward evocation of amateur dramatic improv.

As for Denzel, he never seems particularly motivated to actually convince his son to go to Big University, even though his long-term freedom is on the line. Nor is he particularly emphatic about making his son forgive him for killing his mother. Mostly he kind of drifts around, buys Air Jordans, and attempts to charm a prostitute into sleeping with him, but settles for charming her and paying for sex anyway. The movie oscillates between scenes like these, and scenes of his son Jesus kind of meandering around in an annoyed fashion. Attempts are made to craft the movie into a sort of Blue Chips solely from the student’s perspective, but its too vague and dramatically inert to accomplish much. The dramatic crux of the movie, the final one-on-one game between Denzel and Jesus, is an oddly resigned affair, set to the same bombastic orchestral music that awkwardly canvasses the movie as a whole, robbing any particular instance of any real weight.

Also, He Got Game jigs and jags around between abruptly inserted segments of experimental filmmaking, with lumbering flashbacks, garish documentary inserts, overbearing musical scoring, and the like. It feels like Lee had a sack of stylistic gimmicks he wanted to try out, without any real narrative bones to hang them on. Still, the bad acting, dramatic inertness, and baffling/irritating stylistic choices occasionally align in just the right way to create the odd moment of grace, calm, or strangeness that rises above the overall mélange.
Posted by Cody Peace Adams at 10:08 AM

Searching for the Ultimate Dating Site? Join to find your perfect match.