Match-up of the Night: Gasol vs. Duncan 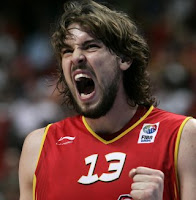 This was a difficult match-up to choose, as this Grizzlies team is packed with exciting, however undeveloped, players. With guys like Rudy Gay and O.J. Mayo roaming the perimeter and slashing toward the hoop, it's going to be hard not to keep your eyes peeled on the free-wheeling Memphis backcourt. But if you want a solid barometer of Memphis' real potential this season, make sure you focus on how well Marc Gasol plays against Tim Duncan.

Gasol won't be alone. Darrel Arthur will often be found aiding the Spanish giant as he attempts to reign in the 2-time MVP. But Duncan is the most difficult post player the Griz's young frontcourt duo has had to face since they took on Yao Ming on opening day (Yao had 21 and 10 in a sloppy Rockets victory), so in some ways this is an unprecedented challenge for the bearded big man.

Honestly, there isn't much to note other than merely directing your attention towards these two. Gasol is a physical player, so I would say expect him to use that towards his advantage as he attempts to disrupt Duncan's seamless offensive style but other than that I don't have much to go on as far as predicting how Gasol will approach Tim. All I can say is (and this always applies but it seems especially so this evening) that the more people it takes to stop Tim, the worse for the Grizzlies. If guys are coming in off the wings because Duncan is scoring effortlessly, I would expect some combination of Hill, Finley, Mason and Ginobili to make Memphis pay on the perimeter. Although O.J. Mayo is becoming the leader of this young team, Gasol is the lynch pin tonight.

A Notable Mention goes to Hill vs. Mayo. George Hill probably isn't going to start and with the addition of Mike Conley and Javaris Crittenton, Hill may not share the court with Mayo too often. But if he finds himself matched up with the former USC star, I am intrigued to see the outcome. I have high hopes in regards to Hill's defensive abilities and having to cover a score-first combo guard like Mayo will be a challenge for the rookie. It also is a fascinating glimpse into the future of the two franchises. Neither of these rookies were halfhearted pick-ups: Both have been factored into the long term plans of their respective teams. When you watch Hill settle into the defensive crouch and man up on Mayo near the top of the arc, you are looking at the future of the Southwest Division.
Posted by Graydon at 1:18 PM