In the lead up to the NBA season, I'm taking the time to slowly but surely go through every player who is likely to suit up in the silver and black this year and at least give some brief thoughts on their likely contribution. I know some of these players better than others, so some will subsequently receive lengthier consideration, but everybody gets a little attention. Today: Michael Finley, Bruce Bowen, Salim Stoudamire.

At 35 years old, Finley is no longer the amped gunner we once knew, but his stroke remains pure, his competitiveness alive and well. His shooting percentage slipped a tad last season, enough so that his position on the starting five needs to be seriously considered. To be honest, I don't know where Popovich is at regarding Finley's place in the rotation. With the additions of Stoudamire and Mason, we have two new outside shooters who may be more consistent than Finley at this point. But hell or high water, Popovich likes who he likes (see Robert Horry for further evidence), and Finley remains solidly on Pop's good side, which means #4 could be seeing more minutes than is probably appropriate.

Finley does have one characteristic which, at least for me, makes him a valuable member of this team: He takes things personally. In particular, he takes offensive failure personally. There is nothing I love more than when Finley gets pissed. Somewhere in that long and lean body of his is the memory of a man who could score in bunches. And oftentimes, when the shots just aren't dropping, it's Finley who nails a couple to get things back on track. It's difficult to quantify this type of contribution, but if you watch closely, you can see it. I don't think Finley deserves the minutes he's had in the past,but I am happy that he will likely end his career as a Spur (the number of times I am going to type that during this roster breakdown is absurd). 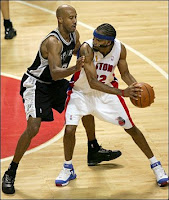 The most controversial member of the current Spurs roster (and honestly, probably ever), Bowen is well known for his lock-down defense and even better known for his somewhat unorthodox tactics. He's undoubtedly lost a step or two over the years, but still has the potential to entirely negate an opposing player's presence on the floor (see his defense on Peja Stojakovic during the Western Conference Semi-Finals for further details). That being said, like Finley, Bowen's position as a starter needs to be reconsidered. And again, like Finley, Bowen is a Popovich favorite and will in all likelihood start 82 games. Just for the record, I am more comfortable with Bowen starting than Finley. As I noted a moment ago, He doesn't have the lateral quickness he used to but he will still be an All-NBA defensive player.

I wouldn't exactly call Bowen an "offensive liability" as he shoots 40% from beyond the arc, but he only does so from his signature spot in the corner. He also only does so when he is completely open, which is the unidentified shortcoming of Bowen's limited offense: most other "sharpshooters" would have inflated shooting percentages if they only took the uncontested looks Bowen is getting. That being said, I do salute him for having the maturity to mostly play within his ability (when Bowen infrequently puts the ball on the floor it gives me a small heart attack).

In regards to Bowen's reputation for being a dirty player, I actually penned a reasonably lengthy defense of his style of play back in May. Take a look, as I continue to stand by what I wrote on the matter. 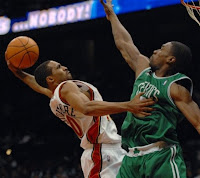 The newest addition to the Spurs roster, Stoudamire was brought in to help the bench provide some sorely needed offensive production. I'm not sure whether this will come to pass or not, as I will openly admit I have only watched Salim play a couple of times, but Ziller seems confident, and that's good enough for me. In theory, his preference for the long ball should fit perfectly into the Spurs offensive scheme.

I'll take this opportunity to say that, whether or not Salim is successful as a Spur, this is a step in the right direction. We need to get younger, and we need to unashamedly go after guys who can score (At points I almost feel Popovich is trying to field an offensively inept team out of spite). I lost countless hours of sleep mulling over how professional basketball players could possibly have such a difficult time scoring for such unbearably long stretches during a game. I don't know if I've ever seen a "contender" flatline offensively the way the Spurs were prone to do last season.
Posted by Graydon at 1:00 PM

I'm Chuck, the managing editor at HoopsVibe.com. I'm trying to get in touch with the site administrator, but I can't find an email address. If you could shoot me a quick message at cy.ellis@hoopsvibe.com, it would be much appreciated.