The Roster: Parker, Mason, The D-Leaguers

In the lead up to the NBA season, I'm taking the time to slowly but surely go through every player who is likely to suit up in the silver and black this year and at least give some brief thoughts on their likely contribution. I know some of these players better than others, so some will subsequently receive lengthier consideration, but everybody gets a little attention. Today: Tony Parker, Roger Mason, and an assortment of D-League hopefuls. 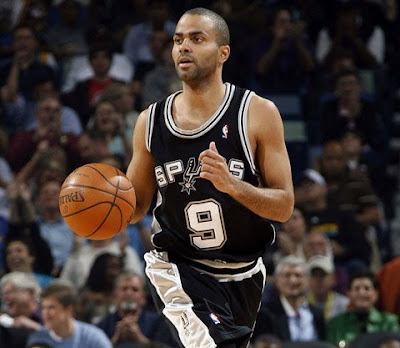 2007 Finals MVP and smoother operator Tony Parker is the only member of the big three who very well may have his best basketball in front of him. Although Tim Duncan remains the foundation for success, Parker has genuinely assumed the mantle of "floor-general." Under the tutelage of Popovich and Duncan, Parker has become one of the premier point guards in the league.

Parker is blessed with blinding quickness, as well as a preternatural sense of pace that allows him to catch defenders off guard. It's not so much that Parker is shockingly fast as it is that he can go from 0 to 60 and back to 0 in no time flat. He uses this ability to score effectively on the fast break as well as in half-court settings. At this point, Parker's ability to attack the basket may be the Spurs' most potent/feared offensive weapon. Although Duncan's bank shot and Ginobili's ability to finish receive much attention, Parker's ability to get into the lane is increasingly becoming the number one priority for opposing defenses.

Parker has worked tirelessly to improve his jump shot, even going through the rigorous process of changing his actual mechanics. He was unable to develop a consistent three-point shot, and subsequently has stopped taking so many outside shots. He easily gets mid-range looks because defenders are so concerned about him beating them off the dribble. If he ever develops a consistent mid-range shot, he will be a very difficult man to defend effectively.

Brought in to replace the loss of Brent Barry, Mason is a classic Spurs small forward: Solid defender, solid outside shooter, capable point-forward if need be (in fact, ESPN lists him as a PG). Last season, Mason averaged 9.1 points per game while shooting 39% from beyond the 3-point line. As best I can tell he can be counted on for a similar amount of production this season. Aside from reliable outside shooting, a staple of any Spurs role player, Mason adds a little bit of youth and athleticism to our aging roster. Brent Barry will always have a special place in my heart, but he's 36, while Mason is only 28. It's a meaningful step forward for a front office that almost seems to hold a grudge against anybody under 30. Until the season gets going, I probably won't have much more to say about Mason, as he seems to fit into the Spurs system in obvious ways.

Aside from the usual gang, a bevy of development league players will be trying to earn a spot during training camp. The most likely to end up in a Spurs uniform next season are Ian Mahinmi, Anthony Tolliver, and Desmon Farmer. Darryl Watkins and Devon Green will also be trying to earn a spot on the roster. Mahinmi has been a successful member of the Austin Toros, the Spurs D-League affiliate, and is perennially on the cusp of earning a permanent spot on the roster. Tolliver played for the Iowa Energy where he averaged 11.6 points and 6.4 rebounds last season. I actually haven't seen much of Desmon Farmer, but Matt Moore has a good breakdown of Farmer's potential over at Ridiculous Upside that I recommend taking a look at. As far Watkins and Green go, I assume they know the rules of basketball, but beyond that your guess is as good as mine.
Posted by Graydon at 10:42 AM