Movies About Basketball Considered by Me, Cody, for Graydon: Semi-Pro

Cody Adams is the author of The Erection of Disbelief and the resident film critic here at 48 Minutes of Hell. This week he applies his keen eye and sharp wit to the cinematic catastrophe, Semi-Pro. 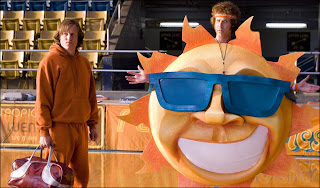 Let’s now move away briefly from the musty locker room of classic basketball dramas for a moment, to the milk-sour locker room of underwhelming basketball comedies. Where better to start than Will Farrell’s recent yuck-fest Semi-Pro? Actually, there are probably over a dozen better places to start, but I saw Semi-Pro recently.

You can tell this movie came into being in a studio pitch meeting that was four words long: Will Ferrell. Basketball. [Contemplative pause. Chin stroking.] Sold! I mean, Kicking and Screaming, Talladega Nights, and Blades of Glory are all classics, right? (Answer: Only Talladega Nights is a classic.)

And they just kind of went from there. Semi-Pro is centered around one of Will Ferrell’s dubiously patented man-child characters, this time named Jackie Moon. Now, I’m not one to hate on Will Ferrell. The man is a natural. Unfortunately his recent success has slotted him into mostly uninspired, lazy, PG-13 material, and Semi-Pro is maybe his most perfunctory vehicle yet.

Jackie Moon is the owner, coach, and power forward of the Flint Tropics, a bottom-barrel ABA team in the dying days of the league. The bad news comes down the pipe that the NBA is taking over, and only the four best ABA teams will make the cut. So the Tropics have to somehow overcome the odds and make it from the last ranked team to at least the fourth. (I did appreciate this slight inversion of the formula; 4th place is the ultimate victory.) And that’s pretty much it. The rest of the movie droops into its barely-trying, utterly predictable sports comedy coffin.

Which isn’t necessarily an insult. What worthwhile sports comedy didn’t have an insulting, bullshit plot trajectory? Semi-Pro still could have been funny. Unfortunately Ferrell’s Jacki Moon character is an uncomfortable, unfocused amalgamation of his characters from every 2nd-tier SNL sketch you can barely remember. Jackie Moon acts kind of cocky sometimes, gets sort of angry, almost sleazy, mildly infantilized. Ferrell works best at (occasionally simultaneous) extremes, when you can’t resist his sheer crazed audacity. His work in Semi-Pro is lethargic and unoriginal, and lacks the consistency of even his lesser roles in movies like Step Brothers or Stranger Than Fiction.

There is one shockingly funny scene early on. Though Semi-Pro has a bevy of talented, or at least recognizable comedians, in its cast, they have almost nothing to do. Except during one extended late night poker game that has nothing to do with the rest of the movie. I won’t go into details, except that it involves GOB from Arrested Development taking absurd offense to a mild insult, an ambiguously loaded gun, and Tim Meadows in an arm cast. The scene feels like it was forced into the movie by the actors, who wanted to at least try to do something interesting for five minutes.

Say, this is a basketball blog! So how’s the basketball? Boring. Semi-Pro doesn’t really bother doing much of anything on the court until the very end, with the too-far-out-there Deus ex Machina invention of the ally-oop. It doesn’t even provide the usual wacky locker room hijinx you expect from a sport comedy. Most of the basketball plot proper is lumped onto Woody Harrelson’s worn-out ex-NBA player, but he’s too old to really get anything done, or care. The rest of the screen time is generally devoted to Ferrell’s mild antics surrounding unorthodox basketball promotions. Like wrestling a bear! That sounds funny, right? Yeah? Whatever, it’s going in the commercial.
Posted by Cody Peace Adams at 12:56 PM