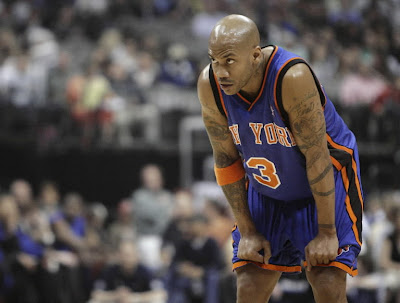 According to the New York Daily News, via SLAM, the Spurs may be taking an interest in Stephon Marbury:

The Spurs might not see Manu Ginobili until late December as he recovers from foot surgery, so if Tim Duncan and Gregg Popovich think they can get Marbury to buy into their system, San Antonio is a possible destination.

Just to preface my remarks, that article is mindless speculation that lacks even the legitimacy of the title "rumor." But, for some reason, I'm addressing it anyways.

It would be an absolutely terrible idea to sign Marbury, for more reasons than I can count. We don't have the money. He won't be happy playing second fiddle to Parker. He is a defensive liability. This list could go on for a while. But really I want to focus on a distinction: The distinction between "crazy" and "egomaniac crazy."

Despite being well known for our collective sanity, the Spurs have flirted with the idea of bringing in a few nutcases now and then if we thought it could help put us over the top. Obviously, everybody remembers the failed Rodman experiment, but more recently the Spurs have expressed serious interest in guys like Ron Artest and J.R. Smith, who are not exactly well known for their calming presence. We also were an essential part of getting Stephen Jackson back on track.

But Marbury is a whole different kind of crazy. His insanity bleeds onto the court in a way that even Artest's instability doesn't. By this I mean, Artest still knows how to play within a system, how to conceive of himself as part of a larger unit, something that is absolutely fundamental if you are going to suit up in the silver and black. Marbury's egomania makes this level of self-awareness almost impossible. Marbury believes he should be the franchise player wherever he goes. That is not going to fly on a squad where several of the players are more talented than you.

The fact of the matter is, the Spurs believe that character and conscience are fundamental not just off the court but on it. We believe that the bonds built between men of decency manifest themselves in an increased level of trust, and subsequently success, on the floor. That's why guys like Jackson, and even Artest, worked or could work on the Spurs. They may be a little crazy, but they have a level of selflessness and loyalty that allows them to co-exist with the Spurs team-centric ethos. Marbury fundamentally lacks these qualities. Not all types of crazy are the same.

I'm not really to worried about this, as I actually have a lot of faith in Buford and Popovich, but I just felt like addressing why Marbury would be a uniquely bad addition to the Spurs roster.
Posted by Graydon at 9:11 AM

If this is true, I can only assume it is because Popovich feels like he has a connection to Marbury from the 2004 Olympics and thinks he could be reigned in by Duncan/Finley/Kurt Thomas. Or the Spurs have suddenly become desperate.

All that said, I have a feeling (read: I hope) this is a ploy by Marbury's agent to get him a ridiculous contract somewhere like Dallas and holds no real truth.