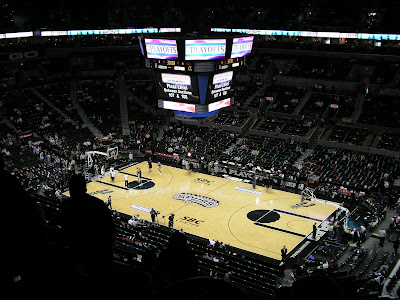 Jones on the NBA, an excellent basketball blog authored by Nates Jones, is hosting "NBA Stadium Blog Day" tomorrow, during which a number of excellent writers will discuss their favorite NBA stadium experiences. This is my contribution:

I have many memorable trips to NBA arenas across the country so it was difficult to choose, but I settled on when I saw the Phoenix Suns play the San Antonio Spurs in San Antonio on December 17th, 2007.

I was living in New York at the time but was in Austin visiting friends and family when I realized Phoenix was coming to town. This was the first meeting between the two squads since the 2007 Western Conference Semi-Finals. Won in 6 by the Spurs on their route to a 4th NBA Championship, the series had become infamous because of the final minutes of game 4, in which Robert Horry hip-checked Steve Nash into the scorer's table, and the subsequent suspensions that followed. Most notable was the suspension of Amare Stoudemire, who was not directly involved in the fray but left the bench area during the altercation. Needless to say, there was little love to be found between the two squads, although a surprising and laudable amount of mutual respect.

I have been to several regular season games as well as multiple playoff games and it is no secret that the latter often have considerably more exciting atmospheres. I have never been to a regular season game that had the intensity and electricity of a playoff game the way this game did. For the Suns this game was about revenge, and during a post-game interview Stoudemire made that clear. This was about rivalry and bragging rights and all the narrative elements that keep games engaging when few long-term outcomes are on the line.

Sensing the importance of the game to the two teams, the fans were volcanic. From 12:00 in the 1st to 00:00 in the 4th, they were loud and proud. Again, Amare in his post-game interview noted this, equating it to a playoff atmosphere as I did earlier. It made me proud to be a Spurs fan as well as thankful to be a fan of the NBA at a time when the level of play is genuinely very high.

Like many Suns-Spurs meetings, the game was close. The Suns led by 1 at half, but there were multiple lead changes. Eventually, after a missed Bruce Bowen 3-pointer to tie with around 30 seconds left in the game, the Spurs were forced to foul and eventually lost by 5. It is no secret that I despise the Phoenix Suns, so it may seem odd that I have chosen a game in which my beloved Spurs lost to them. But honestly, the game was amazing. The fans were energetic, the teams focused and aggressive.

As my friend Nick and I drove back to Austin, I called my girlfriend at the time. She eagerly asked who won and I gave her a brief rundown of the game. She sounded surprised, not at the outcome so much as at my tone: I was cheery and relaxed. People who know me can tell you that after a tough Spurs loss "cheery and relaxed" are the last words you would use to describe me. Nonetheless, I couldn't help but be happy. I haven't lived in Austin since 2003, and have only lived in towns with Eastern Conference teams, so the silver and black stop by pretty infrequently. But I got to see my team play one of our great rivals and the game was competitive from buzzer to buzzer. It was a good day.
Posted by Graydon at 2:58 PM