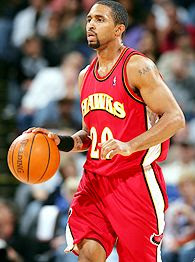 According to the Arizona Daily Star (via Slam via Ziller), Salim Stoudamire is now a Spur. Which is fine. Stoudamire seems to fit the mold as far as Spurs role players go, i.e. he shoots the three ball. Ziller noted that Salim shot anywhere from 42 to 50% from outside while in college, while his percentage as a pro sits somewhere in the high 30's. Given the Spurs penchant for smart, solid ball movement, it's very possible his 3-point percentage could hit 40 (for instance, were he required to take anything other than wide open looks from the corner, Bowen wouldn't be a 40% outside shooter). Stoudamire may be able to rely on The Big Three's ability to collapse the defense and utilize the subsequently created space on the perimeter.

Does this actually solve our offensive woes? No, not at all. But it leaves me intrigued to see if the newly assembled long ball core of Mason/Stoudamire/Udoka can prove to be as reliable as the older versions were (prediction: they won't be).

I would like to note that Salim is a vegan, and that leaves me with mixed emotions.

N.B. Trey has me a little worried.

UPDATE: In other roster related news, the Wizards signed DerMarr Johnson, so he won't be in the neighborhood this upcoming season. Obviously this is a pretty minor development, but as long as we are on the topic of insignificant off-season moves that affect the Spurs, I figured I'd bring it up.
Posted by Graydon at 3:03 PM