In the lead up to the NBA season, I'm taking the time to slowly but surely go through every player who is likely to suit up in the silver and black this season and at least give some brief thoughts on their likely contribution. I know some of these players better than others, so some will subsequently receive lengthier consideration, but everybody gets a little attention. Today: Ime Udoka, George Hill, Fabricio Oberto. 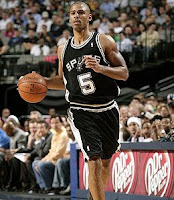 Anybody who read this blog during the season knows I am an unashamed cheerleader for Udoka. A savvy journeyman who played increasing minutes over the course of last season, I think he will be a productive member of this squad for several years. He is thought of as the heir apparent to Bruce Bowen, and in some ways this is true but in some ways he is likely to be a much more versatile member of this team.

Udoka is a lock-down perimeter defender in the mold of Bowen (he did an excellent job covering Odom during the Western Conference Finals-check out Odom's stats from the second half of game 1, when Udoka was glued to him), but he has the strength and fearlessness to bang in the post. He is only 6-6, but he plays above his height. Also like Bowen, he is an effective outside shooter (37% from beyond the arc last season), although he is comfortable letting it fly from spots other than the corner.

Unlike Bowen, he can make effective decisions off the dribble. He's not some miraculous ball-handler, but the man can find the space to get a good mid-range look or to hit the cutter. I don't have some misguided dream that one day Udoka will be a primary scorer on this squad, or even a starter. But as far as our role players go, he probably inspires the most confidence in me. I would also like to note that the man is a complete bad-ass. 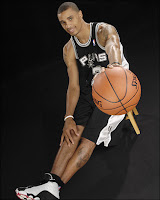 Hill was our first-round pick in this year's draft, and I'd be lying if I didn't say there isn't a number of other players who were available at the time I wish we would have taken. That being said, I think he potentially could be a valuable member of this squad. According to Jeff over at Project Spurs, Hill is already a bust, but I'm willing to give the man a chance. I guess Hill was chosen because Popovich believed he was that special combination of tenacious defender/selfless player that the Spurs crave. But during summer league play, he proved surprisingly inept on the offensive end of the ball. Nonetheless, I can still see him challenging Vaughn for the backup spot at the point. If he can prove to be a responsible ball-handler and an aggressive defender, there is no reason he couldn't be a regular contributor to the second squad. Sadly, I don't hope for much more out of this guy.

Oberto, Manu's shaggy headed compatriot and our starting center, was a valued member of our 2007 championship squad and will remain a reliable however limited member of our starting 5 this year. I think he is a decent defender (given the caliber of player he is often asked to cover), and a surprisingly creative passer for a post-player. His primary offensive contribution comes in the form of garbage buckets, but he and Manu also run the pick and roll quite effectively. At this point, Oberto's likely contribution seems self-evident: He's been a 5 and 5 player for a couple of years and is likely to remain so. At the end of the day, he is a hard worker and competent companion to Duncan in the frontcourt.
Posted by Graydon at 10:03 AM