Other People: David Robinson Gets His Due 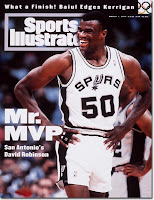 Basketbawful: "[Robinson] led the league in scoring in 1993-94 and is one of only five players to have ever scored more than 70 points in a single game (with 71 points against the Los Angeles Clippers on April 24, 1994). He is one of only four players to have recorded a quadruple-double (with 34 points, 10 rebounds, 10 assists and 10 blocks against the Detroit Pistons on February 17, 1994). In 1991-92, he became just the third player to have ever ranked among the league's top 10 in five statistical categories, joining Cliff Hagan (1959-60) and Larry Bird (1985-86) -- Robinson was seventh in scoring (23.2 ppg), fourth in rebounding (12.2 rpg), first in blocks (4.49 per game), fifth in steals (2.32 per game) and seventh in field-goal percentage (.551). That achievement also made him the first player to ever rank among the top five in rebounding, blocks and steals in a single season. And finally, he's also the only player in NBA history to win the Rebounding, Blocked Shots, and Scoring Titles and Rookie of the Year, Defensive Player of the Year and MVP."
Posted by Graydon at 12:12 PM