Although I will be a part of a couple of season preview projects, including Spurs previews for both Celtics blog and Hardwood Paroxysm, I wanted to take the time and do an extended breakdown of the roster the Spurs have assembled heading into this upcoming season. I've watched some of these players countless times, others I came to know better this past season, still others I've mostly just read their scouting reports. So I'm not going to act as if I know all these players inside and out, but I will give each at least a brief moment of attention. Today we'll begin with Matt Bonner, Jacques Vaughn and Kurt Thomas. 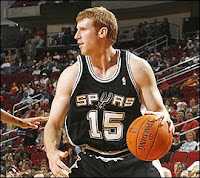 Bonner is at best a peripheral figure on the Spurs roster. Everybody has a soft spot in their heart for "human victory cigar" type players, so obviously I don't harbor any ill will when it comes to Bonner, but there is no reason to act like he will be anything more than a pale-faced blur at the end of the bench. For a 12th man, he is a decent defender, and has a charmingly irrelevant proclivity for shooting from beyond the arc. But you have to actually spend time on the court to affect the outcome of games, something Bonner just won't do unless the outcome has long before been decided.

Vaughn is the backup point guard to Tony Parker, although his job may be in jeopardy now that we have drafted George Hill. Popovich has said explicitly that the backup job at the point is up for grabs. Vaughn is a limited player, but plays relatively mistake free ball (.7 Turnovers/15 minutes per game) , which is fundamentally what the Spurs want out of him. Whether Parker or Vaughn, we don't rely on our point guards to be too inventive in terms of ball distribution. In fact, Ginobili (and Barry) probably brought the ball up as often if not more than Vaughn this past season. Obviously Hill is a massive x-factor, but between Parker, Hill, Ginobili and Mason (whom Popovich likely plans on playing at the point forward) I expect Vaughn to become an increasingly irrelevant member of the roster. 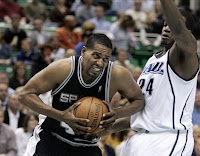 In the winter of his NBA career, Thomas is likely to retire as a Spur. He was acquired from the recently deceased Supersonics during last season to help counterbalance against the increasingly loaded front-courts of the Western Conference (Shaq/Amare; Gasol/Bynum/Odom). Despite his age he remains a solid post defender. He lacks lateral quickness but makes up for it with savvy. He isn't a prolific scorer, but has a good sense of his own limitations on that half of the floor. His preferred shot is a straight on 8 to 10 footer from the top of the paint, and he will only take that if genuinely open. Although I would have preferred that Buford and Popovich had used this off-season for a bit of youthful rejuvenation, I fundamentally trust Kurt's decision making when on the court, and am content to see him in the silver and black for a couple more seasons.
Posted by Graydon at 10:36 AM