Movies About Basketball Considered by Me, Cody, for Graydon: Blue Chips

Cody Adams is the author of The Erection of Disbelief and the resident film critic here at 48 Minutes of Hell. This week he applies his keen eye and sharp wit to that unassailable hoops masterpiece, Blue Chips. 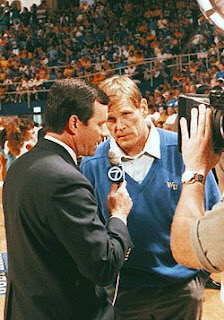 “It sure as hell ain’t much about basketball. It’s about money. God damned money.”

Now that sounds like a basketball film I can get down with. In fact, throughout the entire running time of Blue Chips, basketball only occurs twice. Heck, I think there were more basketball scenes in Along Came Polly! As such I am predisposed to like Chips, not only because of the refreshingly lack of the sport in question, but because Nick Nolte is a glorious tank-engine of an actor, and carries the entire enterprise on his weathered back.

Blue Chips doesn’t exactly fit into the two sports film categories I established in my Hoosiers review, the small time grudge match (Beer League) or the big stakes pro game (Space Jam). Instead, it takes place in the sordid world of big time college athletics, where boys are made into mini celebrities and coaches are made into six-figure pimps. Big colleges are where, uh, healthy small-town boosterism mix with the shady goings on of big-ticket financial bottom lines, to the ethical detriment of everyone involved.

Nick Nolte starts out as an old school bread and butter basketball coach who heads one of the cleanest programs in the country. He wins games but also makes sure his players pass their classes and graduate, the ostensible purpose of college. But after his first losing season at Western University, the man who can’t stand to lose begins to lose the wholesome background that defines his existence. The alumni want a winning team, and the organic talent of the team just isn’t enough anymore against the big boys.

The majority of the film follows Nolte’s tormented descent into the dirty game of star player recruitment, where well-financed programs grease the wheels with ridiculous perks for wunderkind high school ballers. In this day and age any outstanding athlete knows his worth to a prestige legacy program, and demand illegal under-the-table signing bonuses like luxury cars, gym bags full of laundered cash, and even illicit house loans for family members. They are brazen enough to stroll into Nolte’s coaching headquarters to discuss ‘business.’ This disgusts Nolte, but he decides he has no choice but to ‘play ball.’

Nolte’s character, a hot-tempered purist basketball fanatic, who no one would ever want as a dad, begins to come apart at the seams once he falls down the rabbit hole of corrupt college athleticism. His new team, bought and paid for, is phenomenal, but utterly counterfeit. More than being about basketball, Blue Chips tells the cautionary tale of taking that first step out onto the slippery slope of moral compromise.

The atmosphere of the film astutely mirrors the thematic progression. What starts out as a fairly standard depiction of rah-rah West Coast sportiness gradually becomes an oppressive prison-like perspective on the mercenary financial and political pressure of top-tier sports programs. Western University’s ubiquitous pale blue colors, which are worn in nearly every scene by Nolte, effectively become the hues of a prison uniform. His form melds with the daunting institutional concrete as he loses the core of his being. The locker room becomes claustrophobic, and the squeaky echoes of the court are nefarious reminders of the terrible compromises made, jarring madly against the man’s constitution.

I’ve perhaps never seen a sports film where the initial losing game is indescribably more honorable than the turkey shoot Big Game at the end. Every shot scored by Western in the final match stabs Nolte to the quick. The game is soulless, rigged, tortured, unembellished by the usual up-and-down dramatic musical beats. As usual, the game comes down to a photo finish, and as usual ‘our’ team wins. In a crushing defeat of all Nolte stands for. (He deserves major acting props for pulling off the least enthusiastic sitting crowd surf in sports movie history.)

Blue Chips ends with a crushing press conference by Nolte about just how low the state of college sports have gotten. And really, what are college sports about? They’re not local enthusiasm targets for bored domestics, like high school sports. Nor are they true national brands like NBA teams. Instead they are a morass of mixed intent, misappropriation of youth, and ruthless cash-generation. A mini-NBA where the stars shine far less bright and the nature of the attention far more ambiguous and potentially damaging to education. Nolte just loves the sport, and breaks his own heart by cheating on it. But the benefits game doesn’t change. Teenagers around the country are still driving mystery gift cars to and from the locker room. In the end Blue Chips is the story of money extinguishing the fire of a pure heart.

(I would have given the movie four stars, but unfortunately it follows Nolte’s piercing press-conference with him strolling past an inner-city kids basketball game and getting involved. You know, reminding him what he really loved about basketball in the first place. This is followed by text overlays unnecessarily letting us know what happens to the main characters in the fictitious future. Bad form.)
Posted by Cody Peace Adams at 9:26 AM

Always one of my favorites. Unfortunately, finding it on DVD is impossible.