In the lead up to the NBA season, I'm taking the time to slowly but surely go through every player who is likely to suit up in the silver and black this year and at least give some brief thoughts on their likely contribution. I know some of these players better than others, so some will subsequently receive lengthier consideration, but everybody gets a little attention. Today we finish off the roster with Tim Duncan and Manu Ginobili. 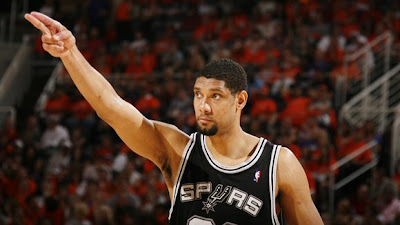 The centerpiece of our dynasty, Tim Duncan continues to be the foundation for the Spurs success. The best power forward in the history of the game, he remains one of the best players in the NBA, despite being past his prime. His offensive repertoire is just shy of indefensible: most opposing teams merely hope to limit him rather than stop him. He is obviously best known for his bank shot, although he has a more varied set of moves than is often attributed to him. He has been able to sustain such a high level of play because he does not rely on his athleticism. He secures rebounds mostly by being in position. He puts the ball through the hoop with infallible mechanics. Eventually his game will deteriorate, but for now he will remain a force to be reckoned with.

Blessed with a combination of intelligence and character, Duncan's level of play is infectious. He understands Popovich's system and style in its entirety and therefore is as prepared as anyone to impart wisdom to his fellow teammates. But unlike many superstars, he addresses them with a mutual respect that ensures that they are listening.

Duncan's most underrated virtue may be his clutch shooting. If one takes a look back at his career, there are numerous instances in which he has nailed do-or-die shots from any number of spots on the floor. His 3-pointer in Game 1 of the first round of the playoffs this year comes to mind, but actually, he has an even more incredible shot that goes unnoticed. During the 2004 playoffs, he nailed a 20-foot jumper to put the Spurs up by 1 against the Lakers in game 5 of the Western Conference Semi-Finals despite being excellently defended by Shaquille O'Neal. Few people focus on that shot, as Derek Fisher hit an even more miraculous shot as time expired moments later. Had Fisher missed, Duncan's shot would be a staple of playoff of lore. 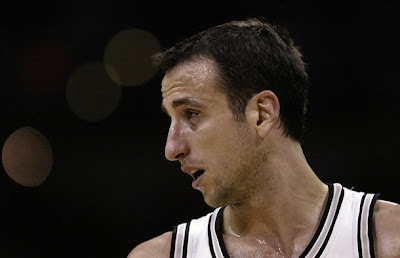 Sixth Man of the Year and the Spurs' leading scorer last season, Ginobili has surpassed his role as "firestarter" and now is amongst the top shooting guards in the league. He is an excellent outside shooter, as well as an inventive and deadly finisher at the basket. He is strongest with his left hand, although his quick first step allows him to jet past defenders in either direction.

Ginobili very well may be the most competitive Spur on the roster, which is saying something given the number of rings the team collectively owns. He does not understand how to take plays off or give less than 100%, making him both an inspiration to those around him and an exciting player to watch. His style is more dynamic than most men on the roster, as he can genuinely score from anywhere on the floor and is more likely to gamble on the defensive end of the ball.

Ginobili currently has an injury to his left ankle that will keep him out until December of this season. His presence will be missed, but won't be crushing. The team is too balanced and too disciplined to allow the absence of any one player to effect its standings dramatically (consider how well the team played while Duncan was sidelined last season). More important than he come back soon is that he come back completely healthy. In this past season's playoffs he played on the same hurt ankle, and it affected his style of play dramatically. In particular he was unable to drive to the lane with the frequency and intensity with which he normally does. Were he to return at full strength, it would go a long way towards putting this team back into championship contention.
Posted by Graydon at 10:35 AM

That shot of Duncan's that you mention - I was watching as it happened and I agree completely with you. That was insane! It was like something out of an action movie, especially if you happen to be watching the clip in slow motion. Duncan nearly goes horizontal taking that shot, and still sinks it. He's amazing, and I dread his eventual retirement.