The Trade Season Tilt-A-Whirl: Twirl No. 1 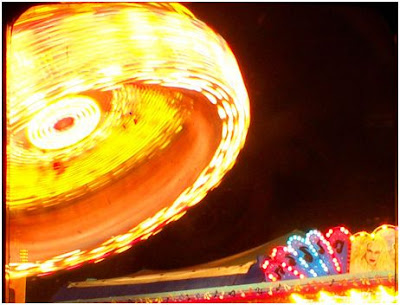 Positives
Negatives
One member of a Spurs message board fired up The Trade Machine and discovered that a salary dump of Vaughn, Oberto, and Udoka for Collison satisfies the CBA. Even if the Spurs included a 2009 second round draft pick(s) into the equation, one wonders if Presti would give up Collison for so little talent in return? The big variable here is how much of Fabricio Oberto's 2009/10 contract is guaranteed. The usual sites disagree, but some indicate that next season's contract is only partially guaranteed. If that is the case, Presti could clear 18 million or more (depending on Oberto's contract) from his future cap--he would head into next summer with a payroll somewhere in the low to mid-30s.

Right now, it looks as if only Memphis is likely to be in the same cap space neighborhood as OKC. But how much money is Michael Heisley willing to spend in a bad economy? In other words, would Sam Presti want cash to spend in a buyer's market? And in a year when the competition for talent is scarce? More specifically, does Presti want to add a Carlos Boozer or David Lee--with money enough left for, say, Zaza Pachulia--to his core of Durant, Green and Westbrook? This might be the perfect storm of opportunity for the ambitious young GM. Turning Nick Collison into Carlos Boozer would be a neat party trick.

On the court Collison is an ideal fit for San Antonio, but is he worth jeopardizing their 2010 cap space? I'm not sure. Perhaps, there is a different way to ask the question. Are the Spurs playing for championships now or later? Collison is not a bit player. His presence would immediately shore up the frontline.
Posted by Timothy Varner at 12:59 AM

you know. I looked at that Stein article and he didn't mention specifically "Nick Collison". Just the fact that the Spurs FO made it known to the whole league that we want another piece..right?

The Collison mention is in the blurb for a podcast in the sidebar and is connected to Ric Bucher. Although, Stein speaks on the podcast and doesn't mention Collison...There is a reason the word rumor is used in the tag. We might go through a dozen of these before the deadline.

I'm not as sold on Collison as you are. While I think he is a smart and solid player, I don't know that he solves all our problems right away. I think he is more like Kurt Thomas than you think. He is a solid defender and rebounder that is mostly unathletic and not much of a shot blocking presence. That being said, I think Collison could help, but I don't think it would be as much as you believe.