Match-Up of the Night: The Curse of Graydon vs. Poor Scheduling 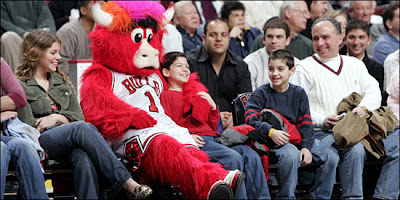 Although I have only lived in Chicago for a little over a year, I am almost legendary amongst Chicago sports fans. For you see I have attended 8 Chicago sporting events and never once has the home town team won. Cubs, Bears, Bulls, doesn't matter. If I am present they lose. For the most part this is frustrating because I like Chicago sports teams and wish them the best. But one day a year this is a sure fire way to ensure I fall asleep with a smile on my face: The day the Spurs come town.

Alas, I am not in Chicago. I am in Washington D.C. So I am not only missing the game (which is frustrating enough in its own right), but there is now the slightest chance we might lose when originally there was no shot whatsoever at a Bulls victory. Poor scheduling on my part (really, poor scheduling on whoever thought the inauguration should be in January. It's the east coast people. Can't we do this in May?).

Anyways, in their first meeting this season an under-staffed Spurs squad (Parker was still out) managed to top the Bulls 98-88. I characterized that contest as a chance to compare Hill and Rose and despite whatever media hype may surround the first round pick, Hill had the better game. But Rose has continued to improve over the season while Hill's momentum has slowed a bit. The Bulls are also coming off of a particularly impressive performance against the Cleveland Cavaliers, who I happen to believe are the best team in the NBA. The Spurs, on the other hand, let their post-Laker momentum slip a bit as they got thoroughly handled by a surging Sixers squad. The game starts at 8:30 Eastern/7:30 Central.
Posted by Graydon at 11:42 AM

Today the Spurs really woke up, especially after that embarrassing lost to the Sixers. Can’t remember when the hell did they loose like that.

I think they proved once again, that why the rest of the NBA must take notice of them, come playoff time. But they need to do it on a more consistent basis, especially the numbers of road games coming for them.

Manu was superb from the bench and Nocioni was doing the same for the Bulls. It kind of look like they were both in a boxing match. Exchanging one punch after another!!! (been watching to much of Rocky lately, Hahaha!!!)

To be honest, I’m not that too worried about the Spurs as there are playoff contender team as we all know for a long time. But it is the Bulls that I’m concerned of.

They need to start winning important games and they need more from everyone. Derrick Rose can’t do it all by himself. Luol Deng must step up, so is Drew Gooden. From the bench, they need see more of Noce, they same way we saw in today’s game.

Only then the Chicago Bulls will make it into the post season. By the way, what did you think about the Manu/Noce about? And what do the Bulls need to improve from now onwards?