Reflections on a Rival: The Los Angeles Lakers

This is the first edition of a new feature here at 48 Minutes of Hell entitled "Reflections on a Rival." Some teams deserve more than a discussion of a single match-up. The Lakers are one of those teams. 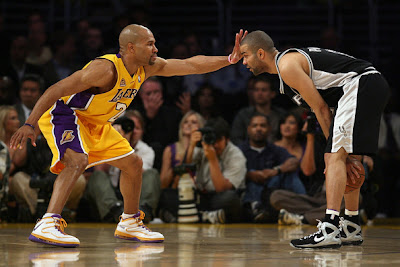 During the last decade the San Antonio Spurs have been one of the most successful franchises in all of professional sports. 4 Championships. A playoff appearance every year since the 97-98 season. No first round exits during that stretch. It is a legacy of dominance that most fans dream of and few have the pleasure of experiencing. And yet these glorious years have not come without their fair share of pain. And more often than not, that pain has been caused by the boys in purple and gold.

In the 5 meetings between Gregg Popovich and Phil Jackson in the post-season, Popovich has only managed to walk away with a single series victory. Although the Lakers have failed to finish the job as often as the Spurs (earning only 3 rings over the same decade long stretch despite 5 trips to the finals), they are the only franchise whose achievements even compare. They are without a doubt our arch-enemy.

In the regular season, our fortunes have been more evenly matched. During Popovich's and Jackson's joint tenures, SA and LA have evenly split the 34 regular season games they have played against one another. This is a pretty uncommon statistic for the Spurs: I can assure you no other franchise has a better postseason than regular season record against us.

There are any number of key match-ups this evening, so I'll go through them one-by-one:

Derek Fisher is a good defender. Both physical and crafty, he can keep up with men several years younger than him (for instance, Fisher has drawn 32 offensive fouls this season, the most of any NBA player. He led the league last year with 55). The official scouting report on the Parker-Fisher match-up is that Fisher, at age 34, cannot keep up with Parker's quickness. But in all honesty, Fisher did a decent job combating the elusive frenchman during last season's playoff series.

The key difference in this game compared to the '08 Western Conference Finals will be Parker's improved jump shot. He is nailing his mid-range looks at a much higher rate than last season and that is making him considerably more difficult to defend. If Fisher can no longer play off him or confidently go under the pick to prevent the dribble-drive, I am not sure he will be able to prevent penetration as successfully (or even funnel Parker into the waiting arms of LA's shot blockers).

Udoka hasn't seen the minutes this year that he was getting at the end of last season and rightfully so: His play has fallen off a tad. But he may see a decent amount of time this evening as no Spur matches up as well against Lamar Odom as Udoka. He has the size to bang with Lamar on the block. He has the quickness to pursue him to the perimeter. No other Spur has the ability to handle both these assignments. I can't be positive this is the decision Popovich will make, but I strongly believe it is the right one.

The frontcourt combination of Andrew Bynum and Pau Gasol is the full-throated manifestation of the Spurs' worst fears. Tim and I have talked extensively about our concerns regarding our frontcourt depth and the Lakers big men are exactly the reason why. In recent weeks we've increasingly noted the Spurs' struggles on the glass and there is no reason to expect that to improve in anyway this evening.

I would say "expect Thomas to see some solid minutes," but I'm not positive that will be Popovich's approach. Instead of going head-to-head with Bynum and Gasol, Pop may try to subvert their size by playing surprisingly small lineups and unashamedly gambling our chances at victory on the rate our 3-pointers are falling. In all honesty, I am not sure I have a better prescription. We have never faced the two of them together. During the recap I'll be sure to include extended thoughts on how we chose to approach this situation.

When you figure out how to stop Kobe Bryant, you give me a call.

Tonight is going to be a tough game. The Lakers are the only team in the Western Conference that is definitively better than the Spurs and they create match-up problems for us all over the floor. But despite that fact this remains a very winnable game. Relax and enjoy it. One day, many years from now, we will all look back and pine for the days when players like Kobe Bryant and Tim Duncan roamed the courts of Los Angeles and San Antonio. Win or lose, these are two great teams and it has been a pleasure to watch them do battle all these years. The game starts at 9 Eastern/8 Central on ESPN.
Posted by Graydon at 10:53 AM

Labels: Reflections on a Rival, the Lakers

Hello. First and foremost - Laker fan here (found the post through the link from FB&G). And I have to say that your Closing Thoughts literally gave me chills. Its truly a pleasure to watch two storied franchises battle it out for the better part of the decade. It will indeed be a sad moment when Kobe and TD are no longer suiting up - all the more reason to enjoy each and every game now.

Great post. Great respect for the Spurs - the ultimate definition of a classy organization. Here's to a great game tonight...

Graydon, is it a travel even if there is contact that causes the player to travel? Or was the contact simply ignored?

I think JVG had it right that there should have been no travel called, and no foul called. It needs to be egregious to be whistled at the last second. Either way, the layup was missed and Tim had great position so the board was his, result would've been the same. Hell of a game. Roger Mason has liquid daggers for blood