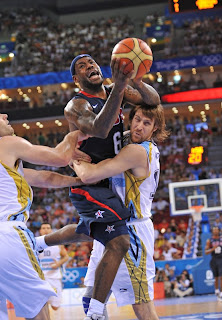 So I went all out and even wore my Argentina rugby jersey to work today, but it was of no use, as the South Americans got pretty thoroughly handled by Team USA, 101-81. Let's get down to business:

Manu: Manu Ginobili is the best player on the Argentinian squad and their most prolific scorer, but he went out during the first quarter with an injury and never returned. I would like to say otherwise, but his presence would not have made a difference. Yes, it may not have been a 20 point blow-out, but he wasn't even playing that well when he went out. Obviously he still had plenty of time to pull it together, but I just don't think that's a legitimate excuse in this instance. I hope he is healthy enough to play for the bronze. I'm not even gonna talk about my anxieties regarding the regular season.

USA Defense: Team USA was active out there. I mean really active. Shifting feet, quick hands. Even Melo was fired up and playing some hard D. When Team USA approaches the defensive end of the court with that much tenacity, they really are unbeatable.

Anthony: Melo seemingly had a poor shooting game (3-14 FG, 2-8 from 3 pt. range), but he was 13-13 from the line and led the team with 21 points. In general this was a Melo we don't often see. He was physical, he was fired up (he got really testy with Oberto at a point), and he was playing tough Defense. I can't even imagine how much the Nugs wish he played like that consistently.

Scola: In the absence of Manu, Scola really stepped up this game. He was physical in the lane, and showed some great footwork on offense. Although not as strong as some NBA players, he's relentless and it pays off. I am excited to see what he, Artest, and Yao can do collectively next season.

3-point shooting: I said the Argentinians would live and die with the long ball, and it pretty much turned out to be true. They went 6-23 from the outside, a meager 26.3%. I was thinking they were gonna need to shoot over 40% from outside to even have a chance at stealing this one. Looks like that didn't pan out.

MVP: LeBron should be the MVP of Team USA, but I want to make a case for Wade nonetheless. LeBron has been excellent on defense, particularly on the help side. He's been active on the boards, and wisely restrained with the ball in his hand. But Wade has just been such a warrior out there. I really don't feel like anyone has played with close to as much intensity as Wade has. I think the whole "Redeem Team" rhetoric is silly, but for Wade this is about redemption. Not Olympic redemption, but redemption in terms of all those people (myself included) who didn't think he would ever seriously bounce back. I just hope people don't soon forget the heart he has shown out there.

Depth: Really, this is about the bench though. The worst players on Team USA (probably Prince or Boozer) would start on pretty much any other Olympic squad. It became most viscerally clear to me when Coach K threw in the second team, and that team consisted of Chris Bosh, Dwayne Wade, and Chris Paul (all of whom, I might argue, should be starting). I love the starting 5 for Argentina, but there's a reason so many USA games are close in the first and end up 20-30 point blowouts.

Medals: Personally, I still think this Argentinian squad is the second best team in the Olympics this year. I know there is a lot of hype regarding Spain, and Spain is gonna end up with the silver medal, but I think this should have been the two teams playing for the gold. I still believe that despite Argentina's down right abysmal first quarter.

Withdrawal: What's really most disappointing about this game, aside from the fact that I betrayed my country to root for my favorite player and he didn't even play, is the fact that there will be no competitive basketball for a while now. After Sunday there won't even be basketball really. I don't even really care about the Olympics, but I just wanted to see some quality hoops. And what we got today was not exactly what I traditionally call "quality hoops."

I really think Team USA is gonna crush Spain, but we'll save that for another day, as I have to actually go do some work now.
Posted by Graydon at 9:15 AM