Movies About Basketball Considered by Me, Cody, for Graydon: Hoosiers

I am proud to present the first columnist to join me here at 48 Minutes of Hell: Cody Adams. Cody is the author of The Erection of Disbelief, an excellent film blog "for those with highly discerning tastes willing to watch absolutely anything." Every Thursday, Cody will take his keen eye and sharp wit and apply it to the glorious canon of basketball cinema. The only catch: Cody isn't really into basketball. So if you're looking for somebody whose going to slobber all over the mediocre movies you loved as a kid solely because they took place on a basketball court, it's probably best you look somewhere else. He begins his reign of terror by taking a look at that untouchable hoops classic, Hoosiers. Without further ado, the inimitable Cody Adams: 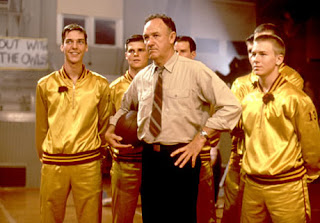 There is perhaps no finer basketball drama than Hoosiers, a seminal sports film depicting the travails and triumphs of a failed college basketball coach taking on the mantle of an obsessive small town Indiana high school B-ball franchise. And by finer, I mean that there is perhaps no other basketball movie that is composed and articulated so finely, so seriously, and so earnestly. Which isn’t a compliment. While it doesn’t reach the self-ecstatic sap-o-drama heights of such sports yarns as The Natural or Field of Dreams, Hoosiers takes low-stakes to dizzying low-key heights.

There are essentially two kinds of traditional sports films; those about the high-stakes professional gambits of national brands, like Major League, Invincible, and Eddie, and those about small-town, amateur, who-gives-a-fuck match-ups where the only thing on the line is a pissing match against an asshole competitor. Hoosiers falls into neither category. Gene Hackman, the principal actor in the drama, plays a character from the first category of sports film, the high-stakes national stage type, who got booted from the spotlight after an unfortunate incident that got him banned from the NCAA. Over a decade later, he’s called by an old friend to take over coaching the high school basketball team of Hickory, Indiana. That’s right, major 1952 Hoosier action, in a one-horse hick town that is unhealthily fixated on the performance of their high school basketball team.

This downgrade from New York national champion college basketball to Bumfuck, Indiana regionals moves Hoosiers in theory to the second category of sports film, the amateur, no-stakes grudge match. Except that in everyman grudge match movies the focus is heavily on the diverse and eccentric personalities of the scrappy teammates, accentuating their underdog trajectory toward the ‘big game.’ Hoosiers barely bothers to differentiate the 5-8 players on Hackman’s team. They’re all tall, skinny, crew cut farm boys wearing identical uniforms. Few of them have more than 10 lines the entire movie. The team somehow grows from 5 to 8 players over the course of the movie without explaining where they all came from. This strangely gels with Hackman’s basketball philosophy, as stated early in the film; no member of the team is more important than the other, and they all must operate as a single coordinated unit. Same goes for the film craft. The Hickory Huckers are an amorphous cracker blob, with only brief, token moments of individuation that are entirely lost during the actual competitive basketball scenes.

So that leaves us with Hackman, a bristly anti-socialite who brooks no guff from his players, his colleagues, or the small minded Hickory townsfolk (who spout hick dialogue like “new-fangled ideas” and “you ain’t been in these parts long”). While this is kind of cool, because he’s so damn rude most of the time, it serves to accentuate how terrible 1952 small town Indiana must have been. Which really detracts from how much you actually care about the pathetic vicarious thrills of the small-minded Hickorians, who apparently have the time to interrupt early afternoon basketball practices en masse to harangue the unorthodox practices of coach Hackman. Going back to the principle of low-stakes. High school basketball is low-stakes. The cinematic transformation into watchable personal high-stakes never happens. We don’t know the players, we don’t know the enemies, and the local boosters are deplorable rednecks. Gene Hackman seems to hate everyone around him, which might have garnered some sympathy, except that as part of his coaching obligation he has to pretend to be a civics teachers at the high school. Gee, I guess my high school economics and history teachers must have had more important shit on their minds while they played old film reels of edutainment like “Chickenomics” and sat in the back of the classroom reviewing stats.”

The first 2/3s of Hoosiers focuses on Hackman doing a bad job of coaching Indiana small town basketball. The team does terribly, and he has constant personal trouble with his team, their boosters, and his colleagues. But then something changes! He’s almost voted out of his position via town hall action, but is saved by the local wunderkind. A kid who has refused to play, but is great, bursts into the town hall meeting and agrees to play, but only if Hackman is the coach. The crowd goes wild! Except that they already voted Hackman out, despite an emotional plea from his younger woman interest. (Who, by the by, just doesn’t get why people are so fucking invested in high school basketball. It’s just a game.) But hey, there’s always another vote. Hackman stays!

And then the film transitions into full-on sports movie mode, with a half hour or so of near constant basketball montages. Despite Hackman’s earlier insistence on fundamental, teamwork, and defense, the new player single-handedly turns the situation round. He’s got a wicked jump-shot, and soon the Huskers are dominating. They make it to the sectionals! The regionals! State! It’s never explained how exactly the scrappy crew of backwoods taters manages this, but we must assume that Hackman’s brilliant coaching led the way. We rarely see actual examples of his innovative technique, but the movie’s musical score assures us that something remarkable is happening nonetheless. Of course, all of this draws us closer to that sports film standard, the big game.

Despite all odds against it, and an apparently huge losing streak earlier in the season, the Hickory Huskers make it to the Indiana state championship. Their enemy? An integrated Indianapolis high school. All of the sudden the struggle manifests as one against the super-tall black athletes of the urban center. This is especially jarring, as every character in the film thus far has been white, and seeing our corn fed Husker clone army knock into black teenagers is disturbing and foreign. But we’re rooting for the white hicks. Does that mean that the real battle of the film is against urban pan-racial understanding? ‘Commentators’ on the game frequently state during the final match that Hickory is the first tiny rural high school to make it to finals. In this sense, they are underdog against the slick, heavily favored force of big city racial athletic superiority.

Predictably, Hackman’s backwater squares get their asses kicked in the first half by the fluid, rhythmic game of the inner city high school. How can they compete? Those guys are unstoppably taller than them. A time-out is called, and it is established that they really want to win. And you know what happens? They start winning! Just because they want to, and they believe in themselves, and every “small town” (white) high school that never had a shot. Minutes pass of hoop-swish after hoop-swish after hoop-swish. By the end, they’re tied. Hackman calls a last time-out, and concocts a clever plan to side-step the opposing team’s expectations. The team doesn’t like this. They prefer that the wunderkind just take the shot. Hackman acquiesces. They win.

The crowning moment posits individual talent over team unity, oddly undermining the previously bland uniformity of the Huskers progression through the ranks. Hackman states early on that “in his experience, no one is irreplaceable.” But the movie ends on a contradictory note, in line with the current state of professional basketball. Give it to the rock star.

(This review would not be complete without a mention of Dennis Hooper’s character, Shooter, the town drunk with an encyclopedic knowledge of local high school basketball. He spends the first half of the movie shambling around in a jacket and hat worthy of a hobo clown, and eventually gets drafted to be the assistant coach, provided that he can sober up. He does, for awhile, but doesn’t really do anything, and eventually just gets drunk again and almost dies from passing out in cold weather (which, incidentally, is how I want to go out). He spends the rest of the movie in a hospital, getting dry, and acting as an easy emotional lynchpin for Hoosiers’ otherwise yogurt dramatic gestures.)
Posted by Cody Peace Adams at 9:40 AM