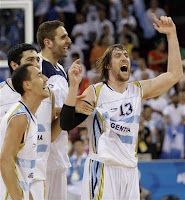 Argentina defeated Greece 80-78 this morning in what turned out to be the most competitive Olympic matchup I have witnessed so far. I think its safe to say either of these teams is deserving to be on the medal stand, and its a shame only one will now have that opportunity. Let's get down to business:

Differing Styles of Defense: Watching the Greek defense during the first half I couldn't help but think back to this most recent NBA Finals, in which the Celtics did an excellent job of being physical with their bodies, while the Lakers were oftentimes plagued with fouls because of their roaming hands. I thought Greece and Argentina created a similar dynamic: Greece is physical, no doubt about it, but they don't get a ton of foul calls because they work a lot with their chest and hips. Argentina, on the other hand, had a tendency to be a little slap-happy during the first half, although they calmed down during the second.

Perimeter Shooting: Obviously Argentina's perimeter shooting kept them in this one, particularly during the first half when they were having trouble creating in the lane. They went 14-32 from beyond the arc. Part of the reason they put up so many shot attempts was Greece's refusal to really come out and guard them on the perimiter. Greece plays defense as a collective unit, and laudably so, but subsequently they seemed more concerned about being in a good position to offer help defense then about reliably marking their man. Greece also exploded from outside late in the game, but it wasn't enough to snuff out the defending gold medalists.

Ball Movement: The nature of Argentina's ball movement caught me off guard. I think of them as being a very fluid team, having several guys who are effective passers. Really, even Oberto is a decent passer for his position. But they seemed to run a lot of isolation sets through Delfino, Ginobili, and Nocioni. If Argentina can't learn to make some safer, crisper passes, I am not sure how they are going to survive against the "steal first" USA defense.

Ginobili: Ginobili played well, scoring 24 points and going 6-13 from beyond the arc. He also had a couple of beautiful drives in traffic, including one in which he blew past his defender with his right, but finished softly with his left. Just another of the thousand plays that prove that Ginobili CAN DRIVE WITH HIS RIGHT.

Delfino: Delfino went off in the 4th, scoring at least 15 points but maybe more. He had a number of clutch three pointers down the stretch as well as made a few excellent drives.

Sofoklis Schortsanitis: This is the kid they call "Baby Shaq," because he's in equally poor condition, just not as tall. I will say this for the guy: He may be the most god awful free throw shooter I have ever witnessed. His first of two free throws hardly even made it to the rim.

Pablo Prigioni: I'm impressed by this guy. I think he could be a legitimate NBA PG if he wanted. Not a starter, but I'll tell you right now, I would trust him with the ball way more than I trust Jacques Vaughn.

Going Forward: Next up, Team USA. To massively understate Argentina's predecimate, this one is going to be tough. I would say they have a couple of things to focus on:

They need to fill those passing lanes. Greece was far too easily moving the ball on the inside. If you give Chris Paul, Lebron James, and Chris Bosh those opportunities, you are gonna regret it.

On the flip side, they need to move the ball a little more. They had to work way too hard to put points up on the board, and it would have been easier with some simple ball movement.

Really, I don't think Argentina can beat Team USA this time around. The only situation I can really imagine is if Argentina got really hot from the outside and stayed hot, coupled with a poor shooting night by Team USA. I don't see Argentina controlling the boards and I don't see them effetively slowing down Team USA's potent fast break game. Anyways, I gotta get back to work. I'm proud of the Spurs out there on the floor, proud of Team Argentina, and very excited to watch the semifinal round. No matter who wins, Argentina-USA is the game I wanted to see from the beginning.
Posted by Graydon at 9:27 AM

I'm afraid the injury to Chapu (Nocioni) won't help our chances any either.

I only caught the last 5 minutes of this game and I was shocked by the isolation's that Argentina ran. I didn't see that coming at all, like yourself I imagined them as very fluid..very "international" if you will. If they bring the isolation game to Team USA, I don't like their chances. That's essentially what Spain tried to do and it didn't work out too well. I'm not sure Delfino can bail them out on Thursday.