UPDATE: Pargo will not be a Spur this upcoming season, as he is instead headed to Russia. He has agreed in principle to a one year/$4 million contract with the Moscow Dynamo. Well, I guess that settles that. Although I must admit, if the Spurs not signing Pargo just means they aren't gonna sign anyone else this off-season, well, that would leave me perturbed. The clock is ticking, Buford, and the names on this list aren't exactly stunning. 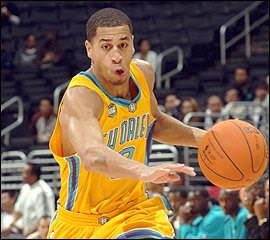 Ever since the rumor that the Spurs are looking into Jannero Pargo creeped up, I've found myself frequently deriding the idea in favor of the Spurs pursuing J.R. Smith. Many people have subsequently called me an "idiot," which is a term I am becoming increasingly familiar with. So, I figured I deserve to make my case:

First and foremost, Pargo is a point guard, while Smith is a shooting guard. This is significant. At the point we currently have Tony Parker and Jacques Vaughn. We also drafted a point guard, George Hill. Oftentimes, when our bench is in the game, we have Manu Ginobili bring up the ball. And when we picked up Roger Mason it was partly so he could bring the ball up in a point-forward capacity similar to the way we utilized Brent Barry this past season. All in all, I just counted 5 guys whom I trust with the ball in their hands at the top of the key (alright, I haven't really seen Hill play and I don't trust Vaughn whatsoever, but you catch my drift). We don't need a back up point guard.

Let's consider then the shooting guard position: Currently on the roster we have Manu Ginobili. And Manu Ginobili. That's right, being that we have yet to resign Michael Finley (a move I hope we don't do), we have only one shooting guard. We drafted Malik Hairston in the third round I believe but I am not giddy with anticipation in his case. It's not as dire as it sounds, being that half of our roster is made up of small forwards who like to shoot from beyond the arc. But needless to say, we could use another gunner/slasher at the 2. 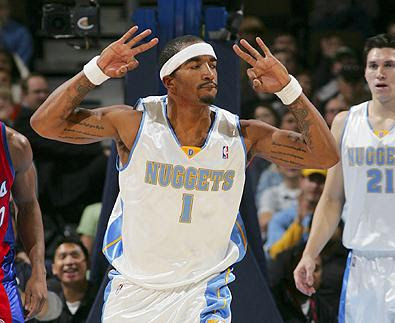 But the reality of the team itself and what it actually needs to succeed aside, let's just put the two players straight up against one another.

Pargo: On his career he shoots .365 from beyond the arc, although last season he only shot .349. His career average for points per game is 6.9, although last season he scored 8.1 a game. His career and 2008 FG percentages are .395 and .390, respectively. He also averages about 2.4 assists a game and .6 steals. He is 28 years old and is unlikely to improve much beyond the current level he plays at.

So Smith plays a position we actually need depth in. he shoots better from beyond the arc than Pargo, as well as just in general. He also brings youth to a squad that has an endless reservoir of "experience." While with Pargo, what you see is what you get, Smith has yet to play his best ball. The other key component that distinguishes the two is their differing ability to create off the dribble. Between Bowen, Mason, Udoka, and Ginobili, we have a solid perimeter shooting core. We need guys who can get to the rim. In my opinion, J.R. Smith and his wellspring of athleticism are better suited to do that consistently.

But Smith is so "crazy." Well, I'll be honest, locker room issues are just not a concern for me. No team takes the concepts of unity and family as seriously as the Spurs. Yes, Smith can be a problem child, but so could Stephen Jackson. And now the man is the heart and soul of one of the most exciting teams in the NBA. Under the watchful eyes of Popovich and Duncan, Smith could really blossom. Plus Smith is just exciting to watch. There is nothing wrong with Spurs fans valuing a little excitement, ya know.

And if you think this is mindless speculation, it's not. The Spurs have seriously looked into both of these players and are critically aware of the need to add another reliable scorer to next year's roster if we are gonna contend.

UPDATE: My man Rohan over at At The Hive just showed me this. I would like you to consider the positions of J.R. Smith and Jannero Pargo on this list. If it takes you a second to find Pargo, check a tad bit further down the page.
Posted by Graydon at 1:56 PM