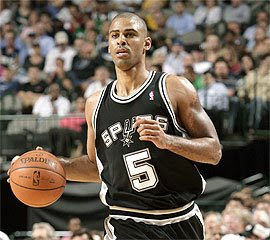 So if you haven't been checking out Skeets and Trey's excellent All-NBA Olympics series, you should. Because it's pretty funny. Typically I don't link to Ball Don't Lie because if you're reading this, you probably read that, but a couple of things went down over there today that I couldn't just let slip by without a comment.

First, the Spurs have been cleaning it up in the ALL-NBA Olympics. Having been a competitive swimmer before deciding that it was more lucrative to become the most dominant power forward in history, Tim Duncan easily walked away with the gold medal in the 100m freestyle. Appropriately enough, the entire silver and black also nabbed gold in Men's Rowing, because who is more committed to the concept of "team" than San Antonio.

But more importantly, Skeets dropped this little bomb on us. If you happened to read this blog during the playoffs, you may have come across any number of pro-Ime Udoka lovefests on the part of your humble author. I'm just crazy about the damn guy. People talk about him as if he is the heir apparent to Bruce Bowen but in some ways he is so much more. He is a fierce defender on the wing and in the post. He can drop it from beyond the arc and make effective, smart decisions off the dribble. He is tough without falling into the "cheap" trap. And, as a frequent BDL reader has informed Mr. Skeets, he can absolutely wail on your ass if necessary:

After the game, they were waiting for us to come out of the locker room. And seriously, I didn’t start it. Kingsley Ogwudire was in front of our team in an all-out tirade in his best Arabic. The next thing you know, there were three Algerian players on him. Everyone was engaged in combat save me, if you can believe it. And lo and behold… Ime! He was taking people out like in Mortal Kombat. Finish him! Incredible. I was so out of it as I had five guys I was fighting (oh yeah, the crowd jumped in as the fight spilled over to the court of the championship game of Senegal and Angola).

In the middle of the whole thing I heard Ime, literally in mid-swing of another opponent say, "Watch back, Gabe" and he calmly, I mean calmly, smeared a guy who, as I turned to see his warning, jumped from the stands with a chair to probably kill me or knock me out to where the crowd would have. I mean, Ime caught the guy in mid air with a fist and calmly continued his dispatching of oncoming people. He and other guys (yes, me too) were whoopin’ so many people the crowd backed up. True to the letter! But Ime had the most notches by far.

Now, I may fancy myself a tough guy but if you've got the tenacity to whoop ass in the middle of a North African basketball riot, well, I'd say that puts you in a whole new class of "tough." It's official: Ime Udoka is my favorite player on the Spurs.
Posted by Graydon at 12:09 PM

I read that article on BDL ("Finish him!") and couldn't believe my eyes.

I'm with you on Udoka's game... I live in Portland and was sad to see him leave town, but felt he was the perfect fit for the Spurs. He'll fill the Bowen role when Bruce retires.