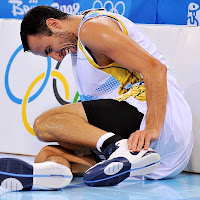 So Ginobili is going to undergo anthroscopic surgery to repair the ligament in his left heel. At this point its unclear how long this will keep him on the sidelines. I am still confident the Spurs can maintain a decent record throughout the beginning of the season even without Ginobili's presence, so to a certain extent I am happy they are addressing the issue of his nagging injury and addressing it thoroughly. That being said, his potential absence only further highlights how underwhelming an off-season this has been for San Antonio.

At the end of the day, we rely on the big three for the vast majority of our points, and we all know a two-legged stool can't stand. We failed to add an offensive player who was capable of scoring consistently, instead choosing to re-sign an aging and increasingly unproductive Michael Finley. We also failed to hang onto Brent Barry, who I feel was the more versatile and consistent of the veteran gunners we have on the squad. I am happy we signed Roger Mason Jr., but its unrealistic to see him as a steady answer to our offensive woes. I am concerned that Mason's addition is thought of in the front office as similar to what the addition of Finley and Horry were when we first acquired them. Although both are now far past their prime, at the time they joined the Spurs they were undeniably solid additions: Finley was an offensive machine and Horry was the premier role player in the league. Mason's addition, however content I am with it, will not be as substantive as previous "tweaks" the Spurs have made.

I am not seriously concerned about Ginobili's ankle. Obviously it highlights his age (because he spent years playing pro abroad people often forget that Manu is 31), but if this is what is necessary to make sure he will be at 100% than so be it. I just think it gives some perspective regarding the front office's inflexibility regarding the current roster: They consistently refuse to invest in younger talent or honestly acknowledge that, however solid our defense may be, our offense must improve significantly if we are going to compete for a championship in the next year or two. No team that wants to compete for a ring should rely so overwhelming on so few players to put points on the board.
Posted by Graydon at 9:18 AM

Graydon, spot on analysis sir. I'm a Spurs fan, but I'm not really confident about this season's prospects. We'll see.

I'm a Spurs fan and in some situations agree that the Spurs have slowed down a bit over the years but also question the conclusion that most fans have come to regarding the Spurs.

Fact:
-Spurs are still good but haven't improved much compared to the other WC teams.
-Spurs are very very good when the big 3 is healthy.
-Spurs have made some small tweaks to their roster but comparatively haven't made very large changes compared to the rest of the WC.

I agree completely on those ones and I think all fans do but some points I don't agree with.

First off, I don't think that the fact that the Spurs offseason has been dissapointing is really their fault. As far as free agent opportunities go there wasn't really much out there that would have fit our team. Maggette wanted more money and even if we could have gotten Artest who knows how he would have fit in, remember Pop did trade Rodman his first year here. Time will only tell how Mason does and the fact that we still have some money left gives us flexibility during a season that is still 2 months away.

Also, I agree Barry was one of our more consistent shooters, but I also think that because of Barry's last game with us against the Lakers, people forget a few other important things about him. Barry is 37, a year OLDER than Finley and Thomas. He was one of the team's best shooters but with everyone whining about age, I don't get how people forget about this especially considering he missed most of last season with a calve injury.

Barry gave us flexibility in his ability to shoot and bring the ball up if needed but he's lost just as much as Finley has as far as age goes including on defense.

If anything as a Spurs fan i'm surprised there hasn't been more press about Horry not coming back. I know he didn't contribute much last season and I don't know how much this actually mattered but maybe he would have been more effective had he not missed the first half of the season. Even more importantly than his statistical contributions as "dirty" as they may have been you really have to sit and wonder if we would have won the championship two years ago or gotten past NOH had it not been for Horry. I'm not saying I approve of it, but it really makes you wonder if the Spurs can pull through the playoffs without an Horry moment.

I just hope that the young talent we have gets a sufficient chance to prove themselves at the beginning of the season to give us a chance later on.