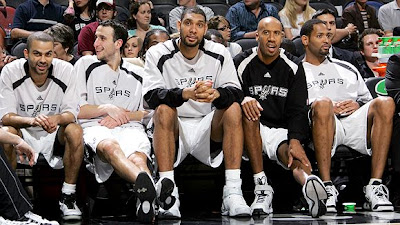 What significant moves were made during the offseason?

The Spurs made few “significant” moves this offseason, choosing to merely tweak the team’s roster as it has done in previous years. By acquiring Roger Mason Jr. and Salim Stoudamire the Spurs attempted to compensate for the loss of Brent Barry as well as the decreased productivity/consistency of Michael Finley. Fundamentally they continued to follow the formula of surrounding the big three with a bevy of outside shooters.

What are the team's biggest strengths?

Tim Duncan is one of if not the best post defender of his era, while Bruce Bowen, although having lost a step, is still lock down on the perimeter. With the development of Ime Udoka, the mid-season acquisition of Kurt Thomas, and the offseason addition of Mason, this team will without a doubt continue to be one of the top defensive squads in the league.

The Spurs will continue to be one of the smartest teams in the league as well. Obviously the team’s intellectual prowess begins and ends with Popovich’s excellent coaching, but it extends throughout the entire squad. Tim Duncan is as cerebral a player you will find on the floor, and the upside of our much maligned “age” is that we are about as savvy a club as you will come across in the entire association.

What are the team's biggest weaknesses?

Depth and offensive consistency, which might as well be a single weakness actually. Once you get past the big three, the list of people who are reliable offensive weapons falls off pretty fast. Mason and Stoudamire were brought in to help solve this problem, but much of their anticipated production relies on the idea that our system will give them better opportunities to score from the outside than they had in their previous gigs, which is a reasonable thing to assume. But it is fundamentally that: an assumption. Mason had a solid year with the Wizards last season and Stoudamire’s professional career has been pretty underwhelming. I am not saying they won’t be the right pieces to help stave of those abominable offensive droughts the Spurs were so prone to last season. I am just saying their track records don't prove they are assuredly those pieces either.

What are the goals for this team?

Win a championship. I know many people feel that the Spurs’ championship era has passed us by, but if the team is fundamentally still composed of a core that won a ring two years ago, than a championship still has to be your goal. A team with a lot of problems still made it to the Western Conference finals last season (and was deceptively competitive given the series’ 4-1 outcome). If the team can remain healthy (during the WCF last season our leading scorer was playing on a bad ankle), a fifth banner could be in the cards. Plus it’s an odd year.

Will this finally be the season the Spurs’ age catches up with them?

Matt Moore asked me this same question about a week ago so instead of rephrasing my thoughts I’ll just quote myself directly:

The age old question when it comes to the Spurs is age. When is their highly touted veteran savvy going to give way to dragging feet and sore knees. For some, like Robert Horry, that transition has already come and gone. But what about the others: Michael Finley, Bruce Bowen, Kurt Thomas, Tim Duncan. All names we associate with high quality basketball, but we've been making that association for a while now. Many think this is finally the season the team as a whole crosses that threshold. But I wouldn't be so sure.

The truth of the matter is, even in their younger days, few of the Spurs relied heavily on athleticism to get the job done. Their glacial pace of play, Duncan's mechanical bank shot, their penchant for creating wide open outside looks. None of these rely on overwhelming physicality. And few squads play defense as such a cohesive unit, which will at least for now continue to alleviate the symptoms of eroding quickness. With that, alongside the injection of a few younger players, such as Mason, Stoudamire and Ian Mahinmi, I wouldn't expect age alone to sink this Spurs roster. Now, if injury continues to rear its ugly head, which it already has in regards to Manu Ginobili, it may be a different story.