Movies About Basketball Considered by Me, Cody, for Graydon: Space Jam

Cody Adams is the author of The Erection of Disbelief and the resident film critic here at 48 Minutes of Hell. This week he takes an unrestrained look at one of the quintessential mid-90's hoops movies: Space Jam. 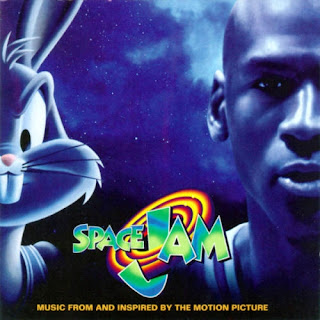 The only apparent reason Space Jam is called Space Jam is because the movie opens to a super-lame hip-hop track of the same title (the music video is available as a bonus feature on the DVD). Next to no jamming occurs, and the climactic basketball match does not take place in space. In fact, only a few minutes in the beginning take place in space. Sure, the bad guys are technically aliens, from space, but they resemble either shrimpy goblins or big goblins, and nothing about them comes off as particularly ‘spacey.’

Most people remember this film through its soundtrack. The year was 1996, and maudlin alt pop music was enjoying a brief resurgence. Space Jam twitters along to such embarrassing hits as “Fly Like an Eagle” by Steve Miller and “I Believe I Can Fly” by R. Kelly, along with songs like “Everybody Dance Now” and “Pump up the Jam” that were at the time little better than stock sound effects for bad movies. (Today we have “My Milkshake Brings All the Boys to the Yard.”)

Now, I haven’t mentioned the plot yet. Frankly, I barely remember it. I assumed going in that I had just forgotten it since I last saw Space Jam when I was 11, but only a week has passed and I can barely remember anything. Almost nothing happens. Some alien knobs come, try to kidnap the Looney Tunes, get challenged to a game of basketball, and steal the powers of NBA players Charles Barkley, Mugsy Bogues, Patrick Ewing, and the human skeleton Shawn Bradley. This escalation of aggression requires the assistance of Michael Jordan to help the Looney Tunes overcome their seemingly unstoppable foes.

(Interestingly the voices of the aliens change drastically after transforming into their powerful NBA juiced versions; initially all the goblins sound squeaky and white, but once enlarged they have exaggerated ‘black people’ voices. Except for the one who gets Shawn Bradley. He still sounds like a cracker.)

That’s about it. There isn’t much of an arc, and it took me about halfway through the Big Game at the end to realize that it was in fact the Big Game. No one plays basketball beforehand, other than some spastic Tuney drills earlier on a cartoon court. The final battle is mostly predictable, with the Tunes getting bent over for the first half, and then miraculously employing their way-illegal cartoon powers in the second half. At one point Yosemite Sam and Elmer Fudd appear in Pulp Fiction outfits and shoot one of the Monstars teeth out with .45s. Weird, and out of place. The best part of the entire operation is when Bill Murray shows up, having entered the Looney Tunes world by having a teamster drive him. Aching for a shot at the NBA, Murray steps in at a critical moment to be the 5th man, and is instrumental in a game tying play. (This is on record as Bill Murray’s least favorite film that he’s ever appeared in, outdoing even Operation Dumbo Drop and The Man Who Knew Too Little.)

But the basketball here is something of a red herring. I mean, Space Jam is based on a Nike commercial, what would you expect. As far as I can tell, the movie actually exists to excuse Jordan’s embarrassing turn at minor league baseball. The film starts with him langouring on the diamond and suffering abuse from the sports media. Then Bugs Bunny and the rest of the gang help him remember what it was that he loved about B-ball in the first place. Then, at the end of the movie, we see Jordan triumphantly return to the court. I was dumbfounded. Did this movie just wipe away the entire baseball thing? Was that the actual only real emotional through line? Yup.

Some thoughts on the Looney Tunes themselves: The voices are done terribly, and they all seem like jerked up ADD versions of the old cartoons. Also, they all apparently live in a cartoon town at the center of the Earth, where they act out the old cartoons as their job. The are otherwise friends, and it’s totally cool for Bugs and Elmer Fudd to play on the same basketball team. Also, in the effort to pump every single stable character into the movie, every individual Tune feels more like an extended cameo than anything. Also, disturbingly the animators chose to introduce a completely original Looney Tune, one Lola Bunny. Lola dresses like a whore, speaks in the breathy, pineal language of sex, and is unsettlingly attractive/ an abomination. The last time we see Bugs, Lola is in the process of jumping his bones, and pulls the screen down to allow them the privacy required to fuck like rabbits. Bad form. Bugs should only ever kiss other male characters in a demeaning fashion while wearing a dress. He kisses Michael Jordan early in the film. Right on the lips. This is fine. But then as a parting gift, we are exposed to Bugs' unbridled, genuine sexual appetite. This problematizes everything that has come before it. Everything. 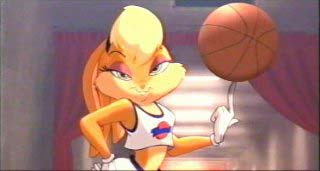